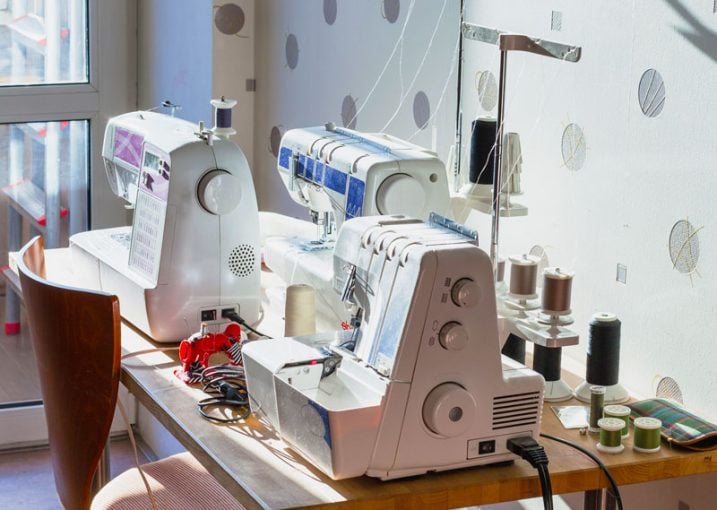 Serger vs Sewing Machine vs Coverstitch Machine – Which One is for YOU?

Who doesn’t love a good showdown? Battle of the titans, each one possessing his own set of skills and excelling at certain areas, clashing one with the other, demonstrating their own virtues and flaws. It’s a spectacle indeed.

Most people know of sewing machines you use at home and think that there’s no other kind of models other than that. Of course, that’s not true and there are a lot of types of sewing machines out there, from industrial heavyweights to handheld tools for quick fixes or wardrobe additions applicators. On top of that, even the normal sewing machines meant for home use also come in different categories.

So out of all those models and types, we decided to put three most notable kinds in a clinch with one another. Those three consist of a serger (or overlocker), a sewing machine and a coverstitch machine. What does each one do? What are they meant for? What are their weak and strong points? Well let’s compare them and find out.

We occasionally link to goods offered by vendors to help the reader find relevant products. Some of the links may be affiliate in nature meaning we earn a small commission if an item is purchased. Read my full disclosure here 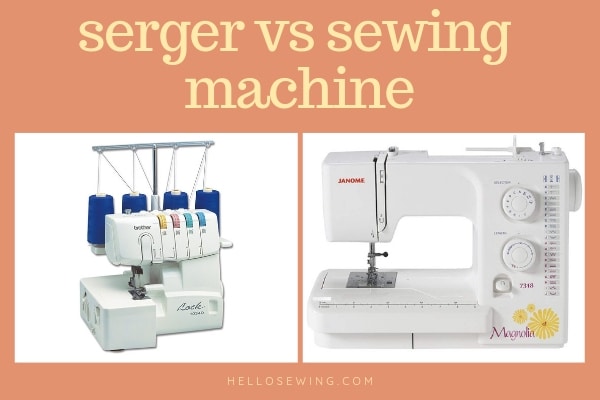 We’ll be starting with a comparison of a serger machine and a sewing machine.

Serger has the first word so we’ll deal with it first. This machine is a specialty machine which means it’s designed so that it does one kind of work specifically and of course, excel at it. Serger machine is a finishing model so wrapping up projects that were close to completion is its forte. It has both a blade and a needle and it uses both when doing its work which is seaming and edge refinement. The machine first slices the fabric’s edge and then, using multiple threads ranging from three to five, depending on the model, encloses the edge, making it wonderful, sturdy and perhaps most importantly, preventing any possibility of fraying or tearing.

Serger can create a few different kinds of edges and in theory, you can use it for any kind of work you’d do with a normal sewing machine, besides zipper inserting, buttonhole making, topstitching and similar. However, the edges it makes have the ability to stretch, which a stitch made on a sewing machine cannot do, but we’ll get to that soon. Sergers also work about two times faster than a normal sewing machine. It also doesn’t stretch the material which is a rare case with sewing machines.

In the world of gladiators, serger would be the fast and short one, using two swords. It can finish things very quickly if you let him do his thing. But if you tell him to play basketball which he isn’t designed for, he’ll struggle for sure.

Moving on to the sewing machine now.

A sewing machine is used for sewing, simple as that? It allows you to connect two pieces of fabric and by doing so, eventually create a whole wardrobe piece or any other sewing project from scratch. Unlike the serger, it can also conduct certain actions that are required if you want to make a complete piece of clothing by yourself. This means it can insert zippers, create buttonholes, apply certain decorative touches like topstitching and so on. It can make various kinds of stitches, depending on the model of course but they all can do a basic straight stitch for connecting two pieces of cloth and zig zag for strengthening the edges or when working with stretchy fabrics.

A regular sewing machine is also the best choice if you’re just a beginner in the world of sewing. Serger is a big no no in that case. Also, they come pretty affordable nowadays so most people can purchase them without worrying about their budget.

If it were a gladiator, it would be the sword and shield guy. He’s pretty good at everything and can take care of himself. He doesn’t excel at anything but he’s not bad either so he survives each fight easily even if he loses, the crowd saves him because he’s not boring and he does his job well enough. 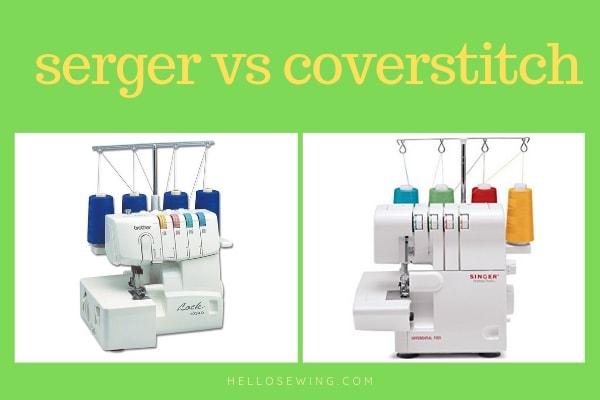 Now we’ll be putting two somewhat similar machines against each other.

Serger and Coverstitch are identical at first glance. Their main use is also nearly identical, both produce fine quality durable edges. But they’re actually very different. Three main differences separate them. Working areas, loopers and a knife. The knife isn’t a gladiator reference here, we’re talking about the real knife inside the machine.

First, let’s take a look at the work areas. Serger working area is much narrower than that of a coverstitch. It’s located only on the left side and thus much smaller. Serger needle plate is also much narrower and its side cover is also smaller.

Now the loopers, the second major difference between these two machines. When a coverstitch machine makes seams it uses only one bottom thread and because of that, it has only one looper. Serger machines on the other hand, have two loopers and they can even be set up so that they use only two threads, a top one and a bottom one. Although, newer models don’t really allow that anymore.

And the third and final major difference is the knife or the blade if you will. Actually, it’s knives or blades because serger machines have two of them, unlike the coverstitch machine which has none. The reason why these blades are there is so that they can first slice of a bit of fabric in order to make a clean cut edge before stitching it and finishing the hem.

Those were the three major differences but let’s take a look at some less important ones now.

These machines nowadays useless both have four threads but serger machines can have five or three occasionally. The number of needles is also different since serger models have only two of them, with older types even having only one, while coverstitch machines have three needles. Coverstitch models also have the ability to have their presser feet changed in order to do certain kinds of work. They also allow you to sew on cylindrical shapes more easily, due to their construction.

What kind of gladiator would a coverstitch machine be? The pretty one who lights up the arena when he arrives. He uses only one sword but he’s amazing with it. Yes he sucks with any other kind of weapon but if you give him his job, his sword, he’ll perform wonderfully.

Which one should you get?

Obviously, if you’re a rich enough citizen of the Roman Empire of course you’ll buy all three gladiators and enjoy their fights.

It’s the same with these machines. If you can afford it, you won’t regret buying all three because they do a splendid work in their respective areas. But if you sew only once in a while then it’s better not to waste money on a mod you won’t use that often. In that case, get yourself a regular sewing machine and it will be more than enough.

If you run a mini sewing business at home though, then you should probably get a serger as well. Your work will have a professional look and you’ll be able to finish it faster.

And if you really got it going and your business blooms, get a coverstitch as well. You’ll have more options and with that you’ll attract more and more customers.

So what will it be?

Best Sewing Magazines for Beginners That Worth Subscribing to

Best Sewing Books for Beginners and Beyond

Gifts for Sewers – 25+ Ideas to Fit Every Budget