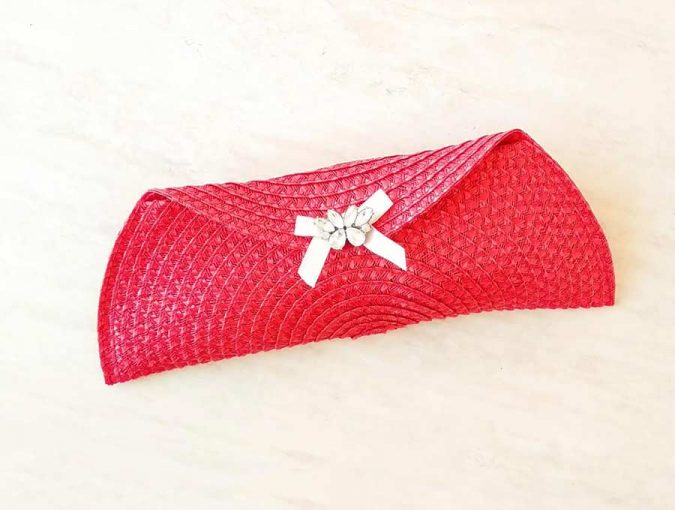 Clutch purses are a show stopper that is really quick to make. Let me show you how to make a clutch purse in less than 5 minutes flat. You can either sew it or just glue it using fabric glue. Both will work.

You can make a placemat clutch for yourself and/or to give as gifts. This DIY clutch purse makes an awesome gift that will sure be appreciated. It’s seriously the cutest thing ever!

If you want to personalize your clutch, there are plenty of options for embellishments – just choose yours. I’ll even show you how to make a stunning fabric rose, that you can use for embellishment. Ready? Let’s dive in the clutch purse tutorial! 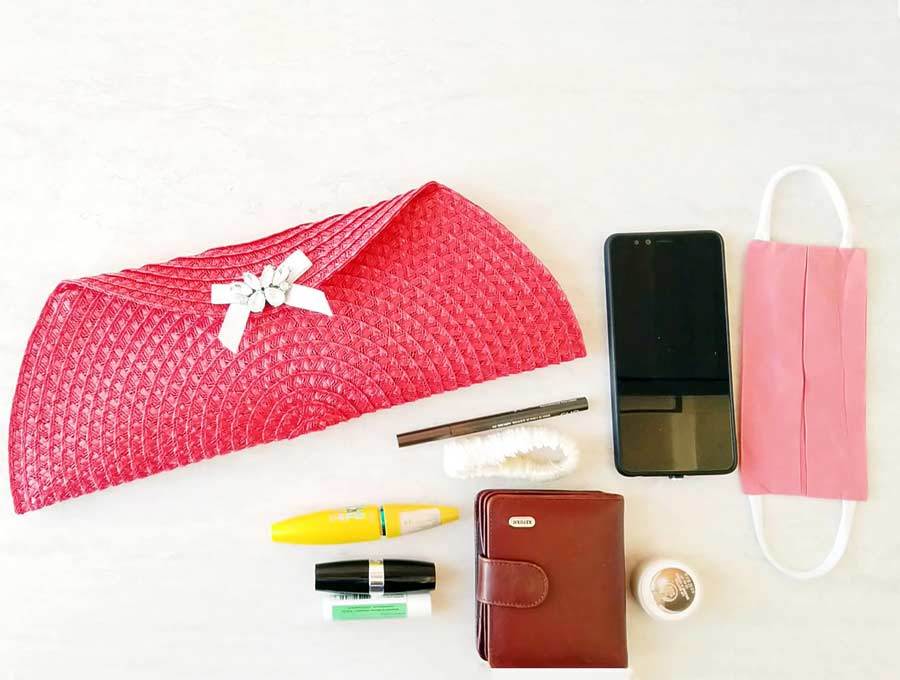 How to make a clutch purse 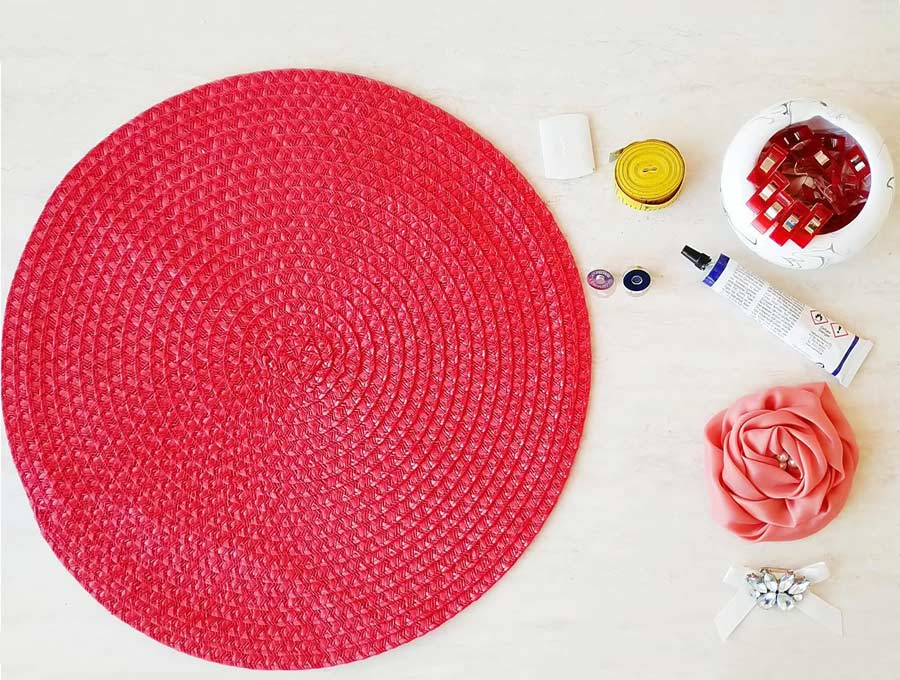 How To Sew a placemat clutch purse

Watch the diy clutch purse video first and then follow the written step by step instructions below.
Please enjoy and don’t forget to Like and SUBSCRIBE over on YouTube to be kept up to date with new videos as they come out. Don’t forget to ring the bell as well to be notified when a new video is released.

STEP 1: Decide on how you’ll sew the placemat purse

Fold the placemat in half so that the end of placemat is inside. You’ll need to inspect the wrong side to find where the end part is. You’ll want this part to get inside the fold to make your placemat clutch as pretty as possible. Unfold. 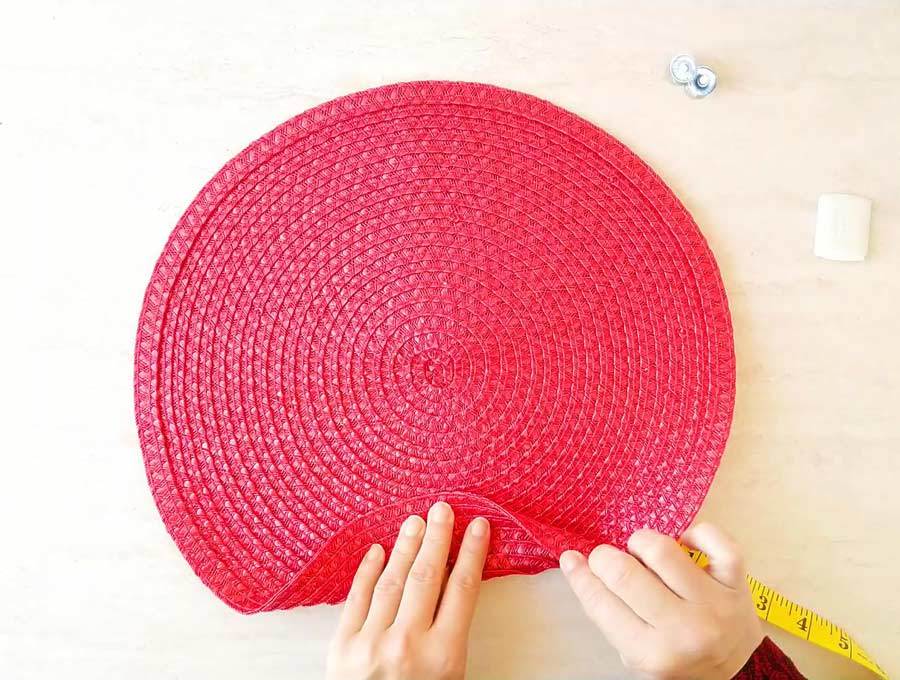 STEP 2: Making the body of the placemat bag

Fold the bottom part inside about 2.5in / 6cm and pin with wonder clips or clotheslines clips. At this point I usually fold the flap in order to determine whether I like the look. You can do the same or just skip that and proceed. 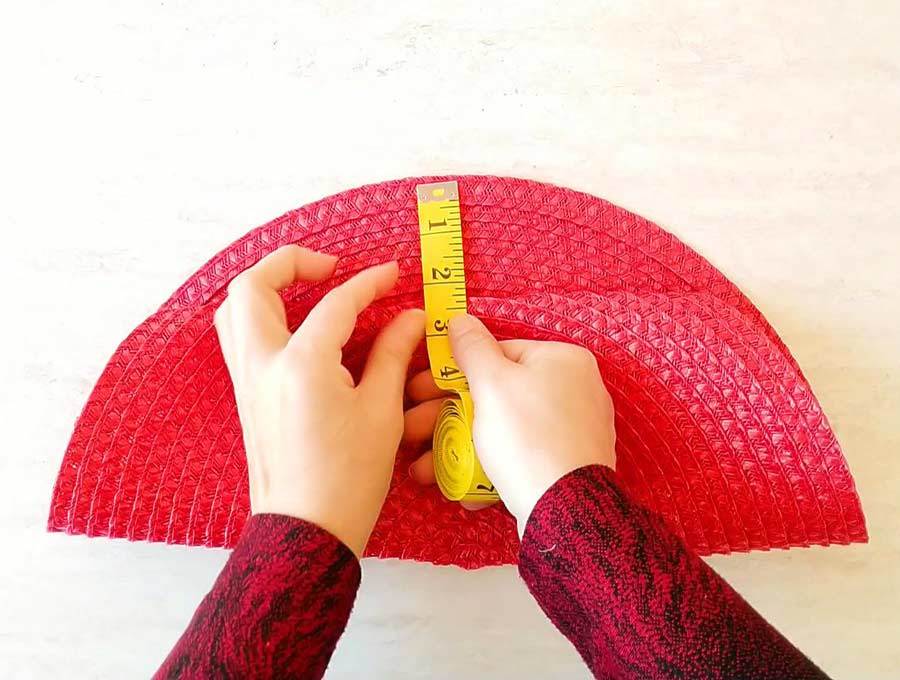 Apply a generous amount of glue inside the fold of the flap. Press down the glued part well. Hold in place using clips, pins or clothing pegs 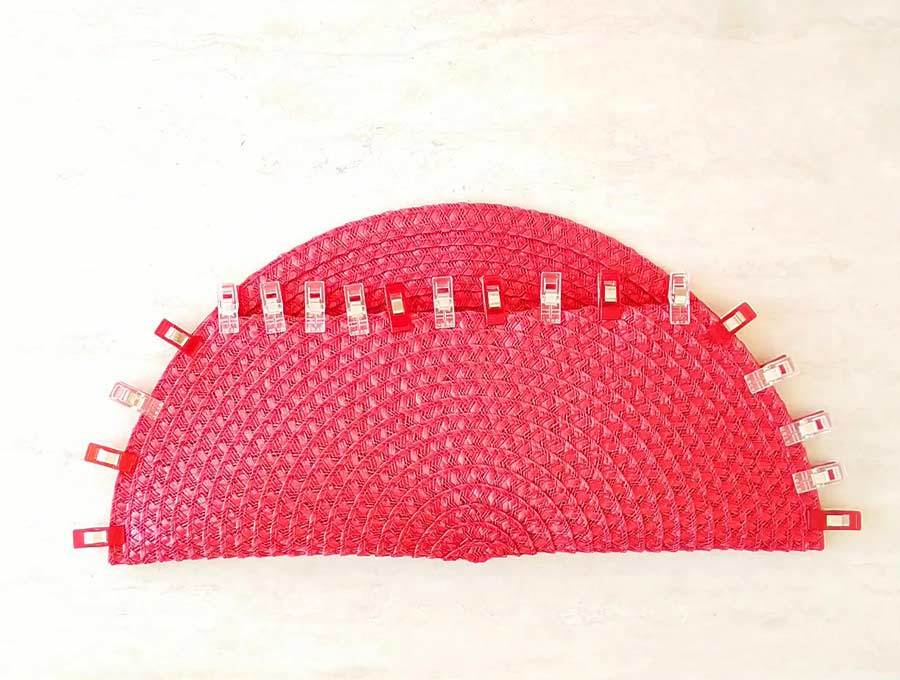 Fold the whole placemat in half and pin the sides using clips. This is how your purse will look like at this point.

STEP 3: SEW or GLUE the sides

This is the only sewing for this whole project. Sew the sides of the placemat clutch using a straight stitch. I’d like to reinforce the seams by backstitching the whole seam or just backstitching the beginning and the end. It’s just two seams. Remove the clips as you sew. 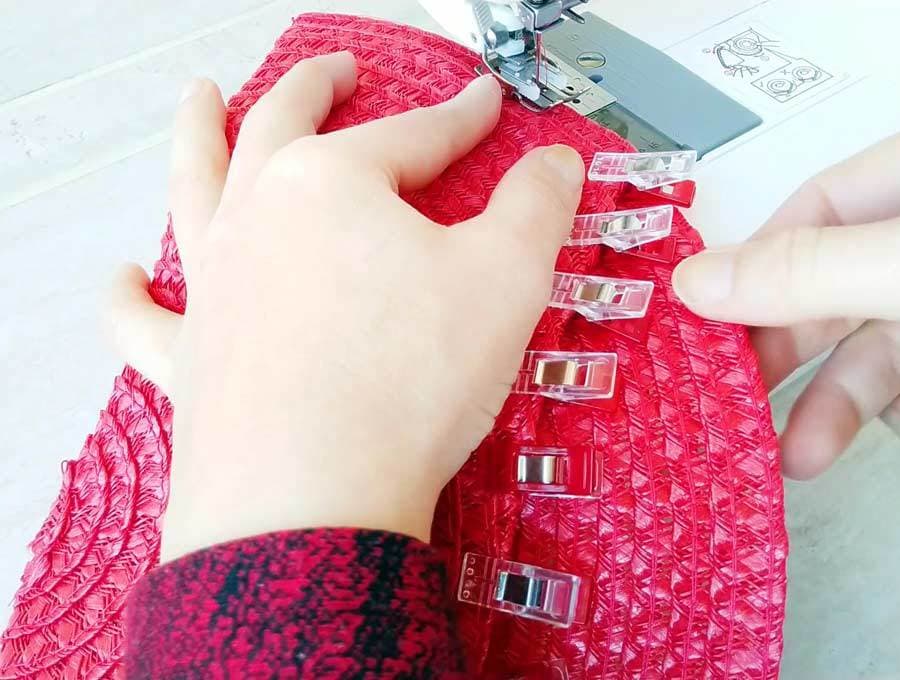 If you don’t sew, you can use glue the sides instead of sewing them. Secure with pins or clips.

Remove clips from the top part after the glue has dried. 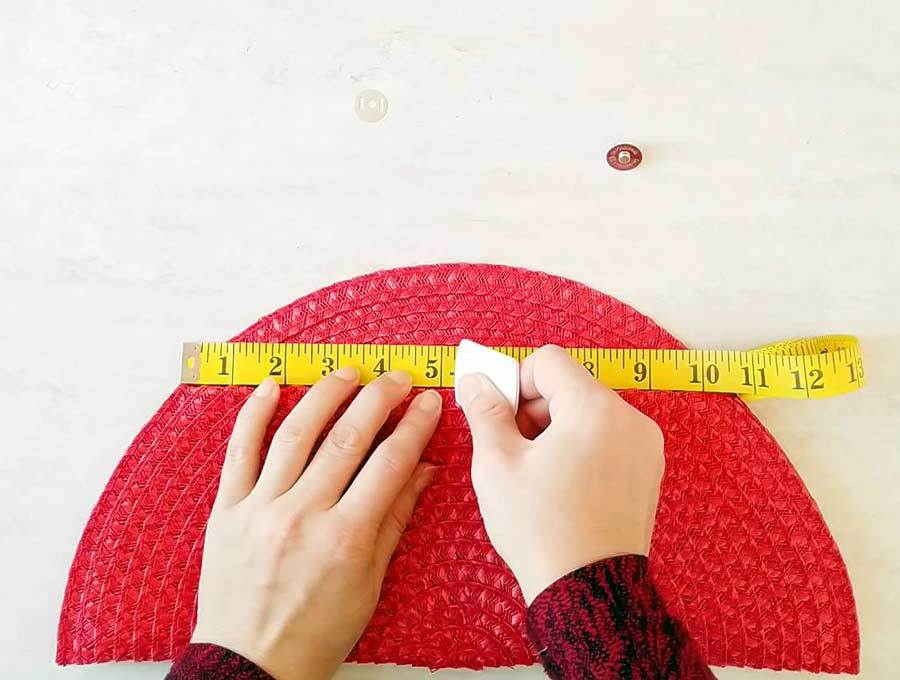 STEP 5: Install the male snap into the flap of the placemat bag

Push the prongs of the male snap into the flap and press firmly against the flap.

Place the metal washer over the prongs and fold the prongs in opposite directions. If you eat your spinach regularly (hello, Popeye) and your hands are strong enough you can fold the prongs using your fingers. Other ways you can accomplish folding the prongs are using pliers or just a pen/pencil to push them against the flat surface. 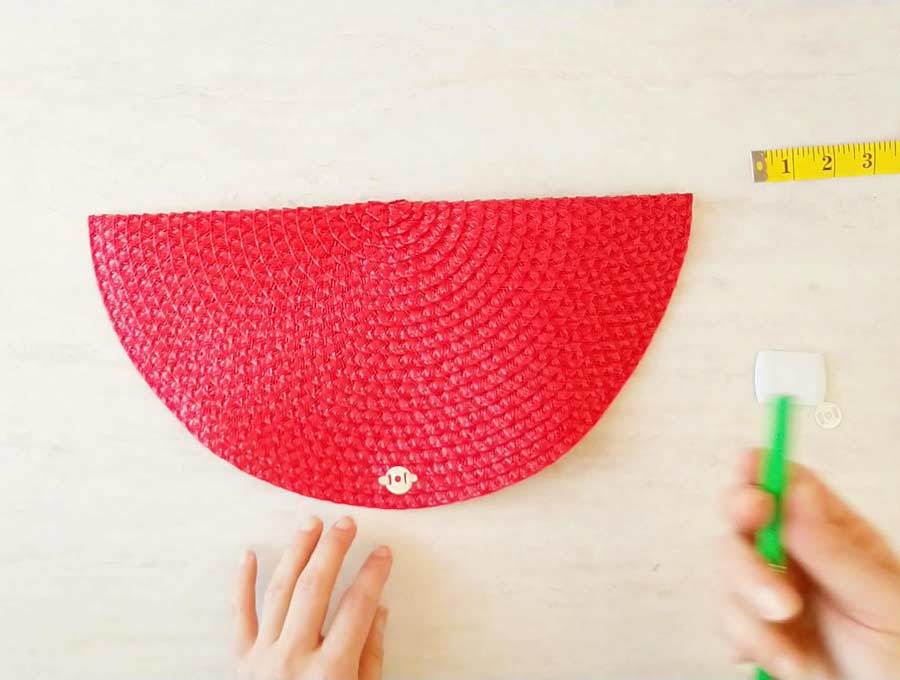 STEP 6:Install the female snap on the body of placemat clutch

Mark the position of the female snap by marking the male snap with chalk or fabric pen. Fold the top and push the marked part against the body of the bag so that it leaves a mark. Use your fabric pen to make this mark more visible and install the female snap. Place the female snap on top of the marking and push its prongs through the body of the bag. It will be a bit trickier than installing of the male snap as you’ll have to pierce through double layer of the placemat. Figgie it a bit to find gaps. If your placemat is too dense, use scissors or utility knife to gently make little holes for the prongs.

Again, place the metal washer over the prongs on the wrong side of the flap and push the prongs in opposite directions to secure them in place. 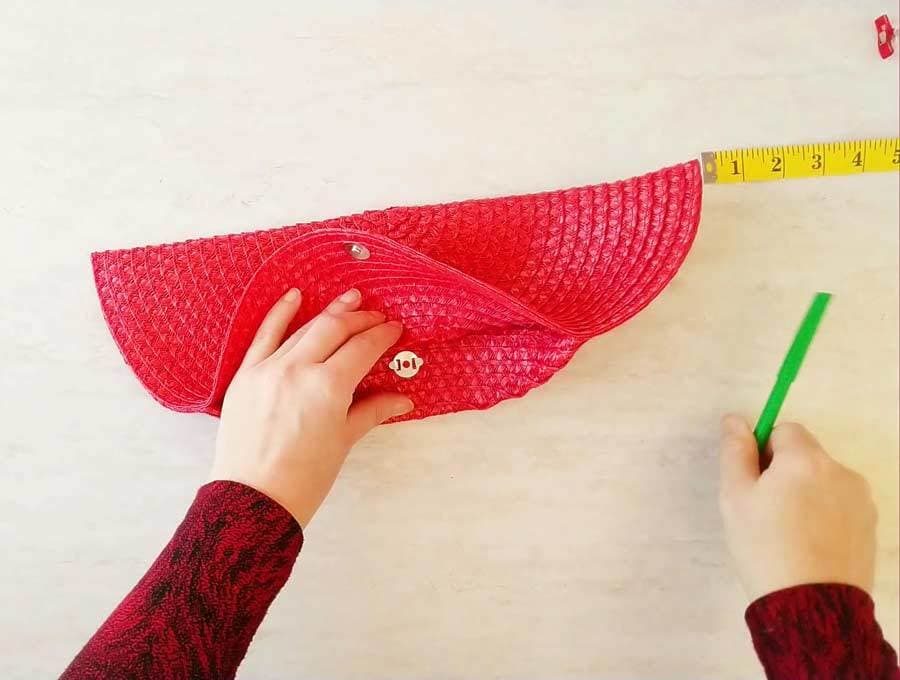 Now for the fun part. Embellish your diy clutch purse bag. You can use a bag jewelry kit, bow, tassels, pom pom trims or whatever strikes your fancy.

Glue the embellishment on the flap of the placemat purse. 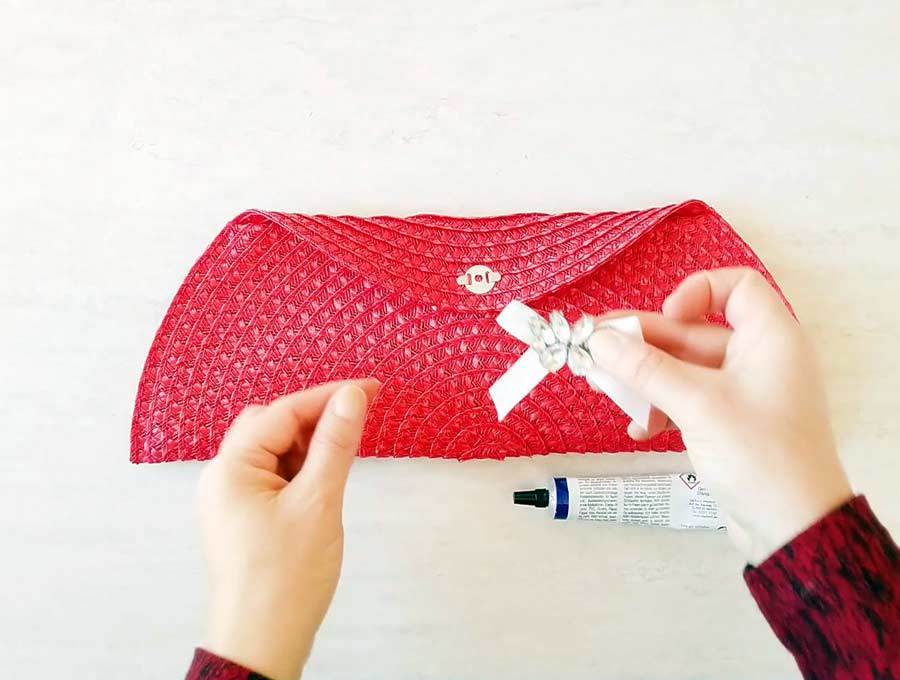 That’s it. Making placemat bags is so easy.

Isn’t it pretty? Now fill it up with your stuff. It holds quite a bit of stuff. You will be surprised at how many things can fit inside this tiny bag! Look! 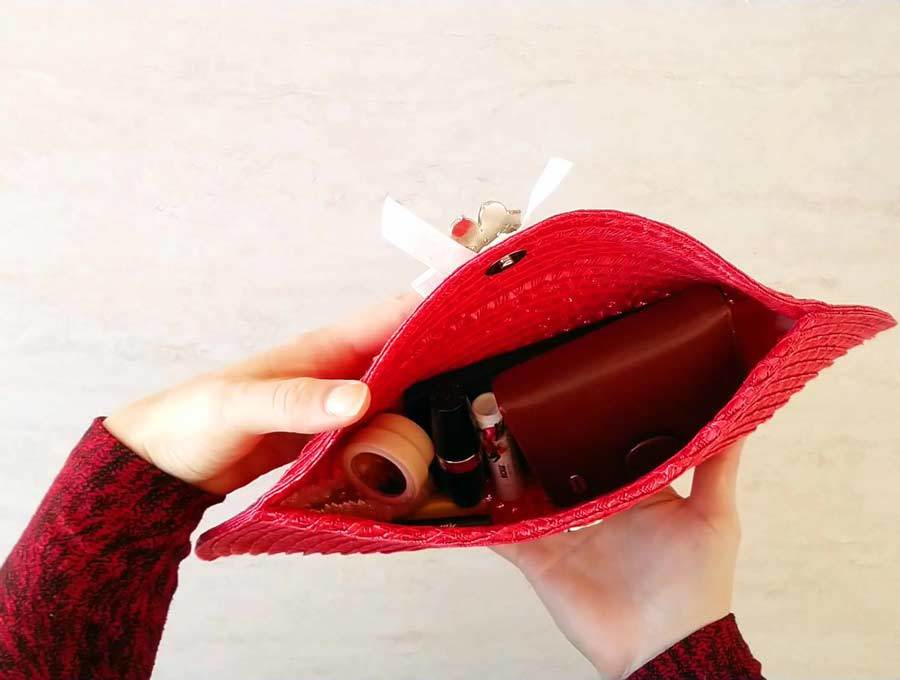 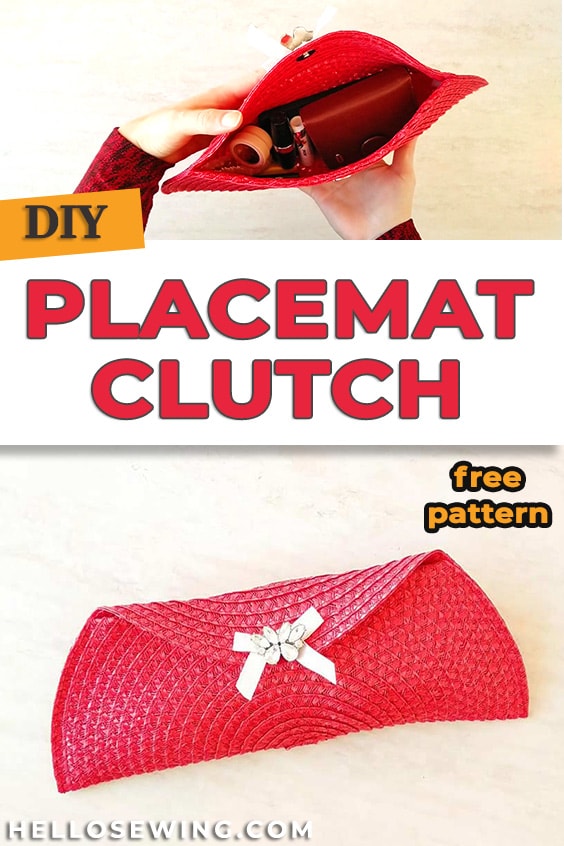 How to Make a Baby Blanket – Pattern in Several Sizes

This is so darling. Definitely saving this idea! Visiting you from the hearth and soul link up.

Brilliant idea, now you can make one in every color! thanks for sharing on craft schooling sunday!

Super creative way to transform a placemat. Thank you for join us at #alittlebitofeverything link up. @fortheloveto

What a clever way to make a CUTE clutch! Thank you for sharing the step by step instructions at Tuesdays with a Twist! -Marci @ Stone Cottage Adventures

Oh wow, that is such a great compliment. Thank you so much for sharing that with us, Marci!

Brilliant idea! I have some green placemats just like this that I planned on putting in the recycle bin. Not anymore!

You are very welcome, Marie! Glad you loved this quick tutorial.

Wow! What a great idea. It’s also a perfect gift. Love it. Thanks for sharing it at the party!

That’s fab! I would never have thought of using a placemat, very clever!
Thanks for sharing with #MMBC. 🙂

Very clever! Thank you for sharing at Party In Your PJ’s.

Very creative transformation.
Thank you for sharing with us at Meraki Link Party.
Much love
Naush

What a fun a creative project!

Thanks for sharing with us on the Homestead Blog Hop!

This is so adorable! And I love the color of the place mat that you used. What a fun little accessory and it looks super easy to make! Thanks for sharing and joining the #StylishMonday link party.

Yes, this is super easy to make and one of my favorites too! Thanks for your good review

Such a cute craft and easy-to-understand instructions! Speaking of placemats…and not to take anything away from your placemat purse, but…

Several years ago a friend gave me a purse made from the cloth placemats. It had a boughton handle (wood, bamboo, chain7). It was made from the oval placemat. There are so many patterns and colors to choose from. Maybe your “sewing” crafters would be interested in instructions for the fabric version.The cloth purses are pretty, but I do not sew. Thank you for interesting posts.

Excellent idea! Gonna try it. Also thinking I could use velcro as a clasp as well and use something like crochet thread/wool to hand stitch some decorative features on the outside. What do you think?

Wow! This is epic, I loved reading your blog. Can you also share some insights on how to make a DIY box clutch bag?

A handbag carried during the day is usually larger than the one that you’ll be taking to dinner. No matter what the occasion, it is never appropriate to put one’s handbag on the table-it is considered extremely rude no matter how expensive or beautiful it is. We often place our handbag on the kitchen counter, a bench, and some even momentarily meet the floor so for hygiene reasons alone, it is not acceptable.