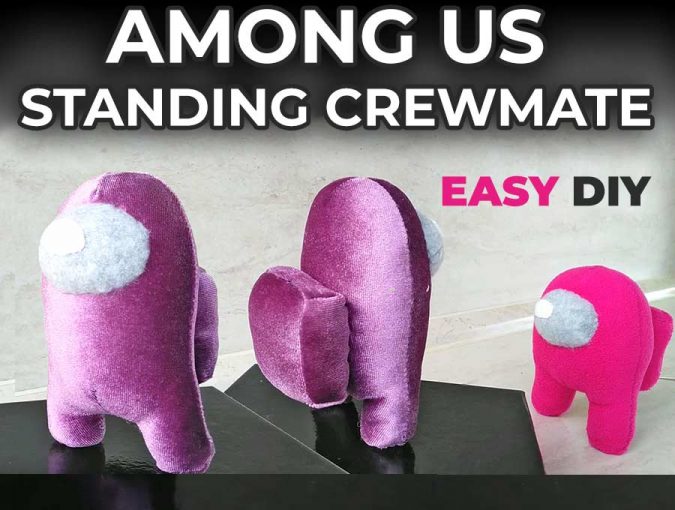 My teen came to me asking me if I can sew him up an Among us plushie. Say whaat? Actually, sew him something? He is usually not asking me to sew stuff for him, so I jumped at the chance. I have never heard of AMONG us game, but he informed me that it has been around for few years now and it is gaining popularity ever since the first lock down. Quickly he informed me about all the AMONG us characters – the crewmates and the impostors, what a dead body is and we got to pick up the colors. I pulled out the suitable fabrics out of my stash and we got together to choose a color for the among us crewmate plushie he asked for. 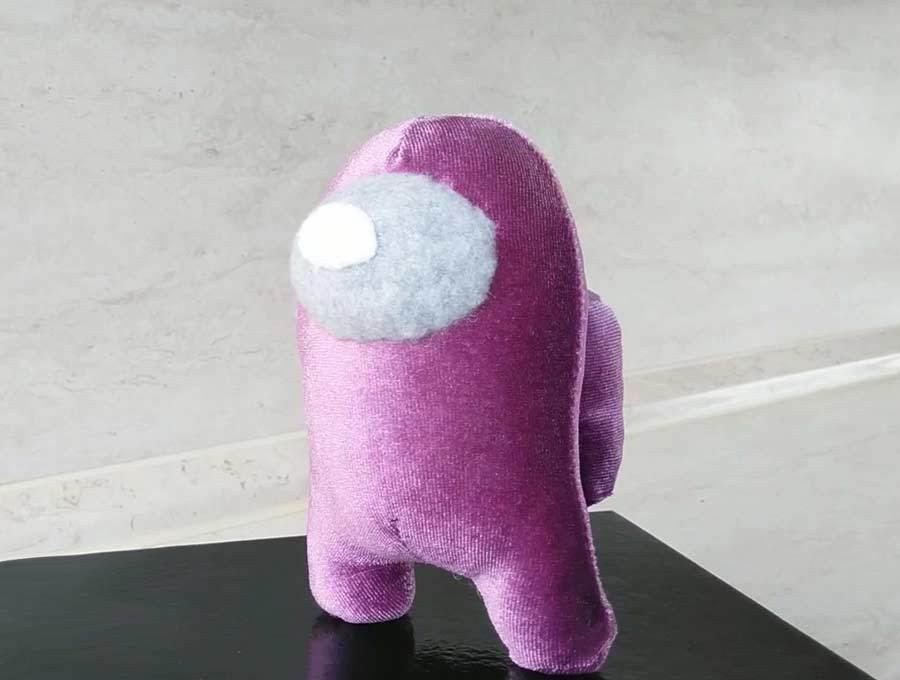 If you are playing the game, you already know the variety of colors these characters have, but it was all new to me – blue, cyan, pink, purple, green, red, orange and bright yellow. He looked around and decided on purple standing crewmate. Great! He then proceeded to tell me more about the game, the crewmate’s tasks, what SUS is, and how crewmates can vote out the Impostor. These little creatures are not difficult to sew at all, even from complete beginners. If you can sew a straight stitch, you can make this adorable standing crewmate plush. If you can’t – just watch my video – I’ll show you every little step. And finally -if everything else fails then ask mom or granny to do it for you. 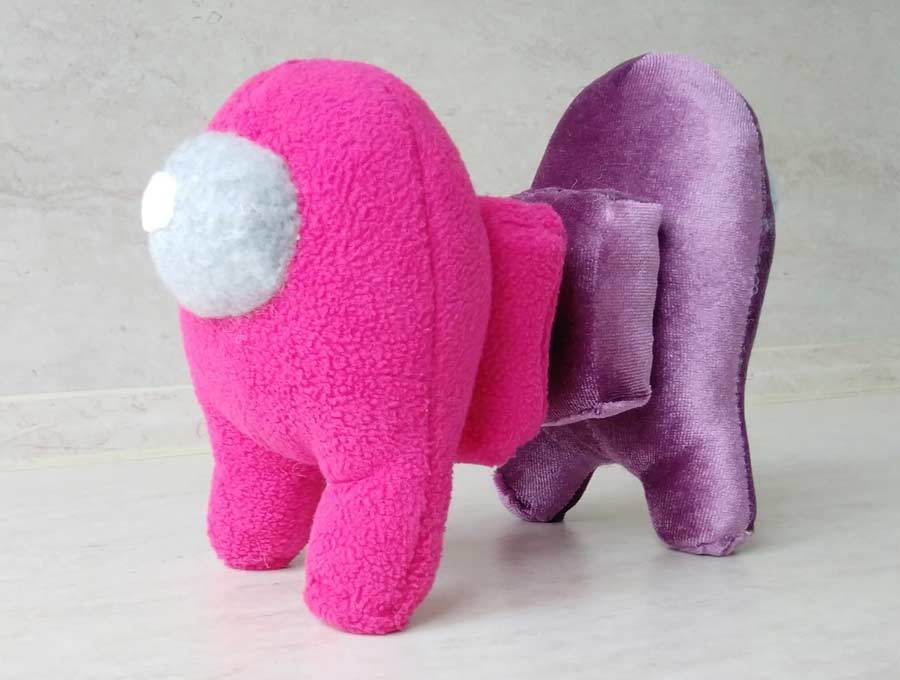 Below you will find my step by step among us crewmate plush pattern and written tutorial with VIDEO instructions for all the visual learners.

How to make a Standing Crewmate Plush 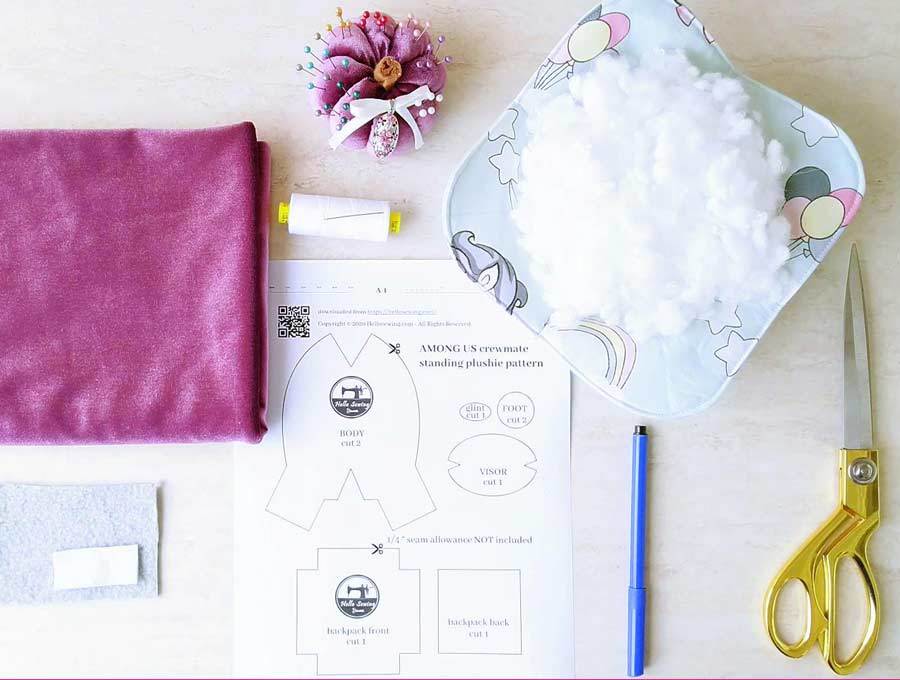 AMONG US character standing crewmate PATTERN

How To Sew a Crewmate plushie

Watch the diy standing among us crewmate video first and then follow the written step by step instructions below.
Please enjoy and don’t forget to Like and SUBSCRIBE over on YouTube to be kept up to date with new videos as they come out.

Download the among us standing plushie pattern from the link to the template above. Print it at 100% (no scaling at all) on one piece of paper. Cut out pattern pieces, trimming any excess paper. 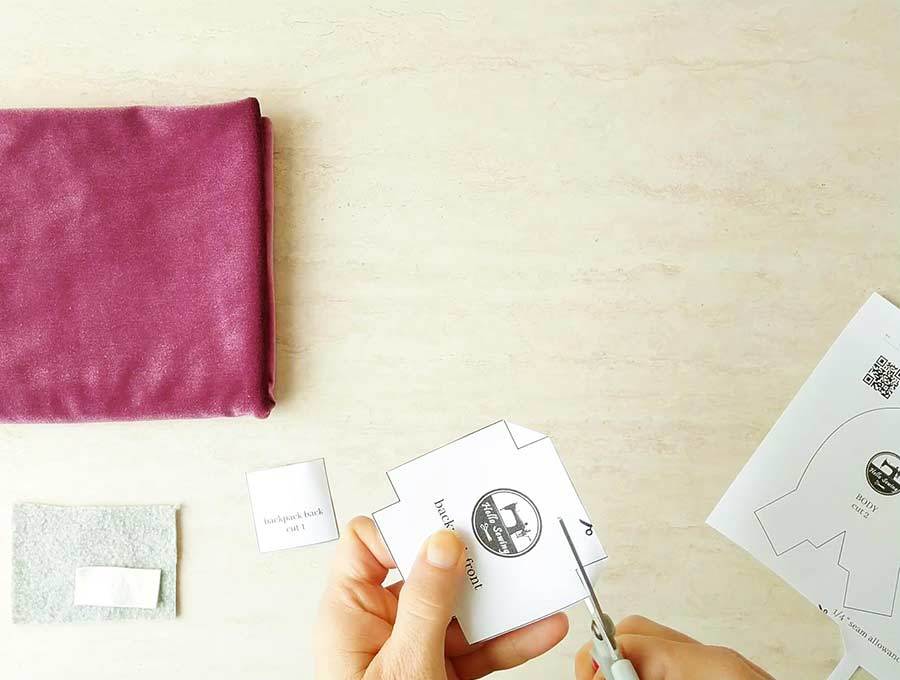 The only fabric piece you will cut according to pattern (without adding seam allowance) is the glint. 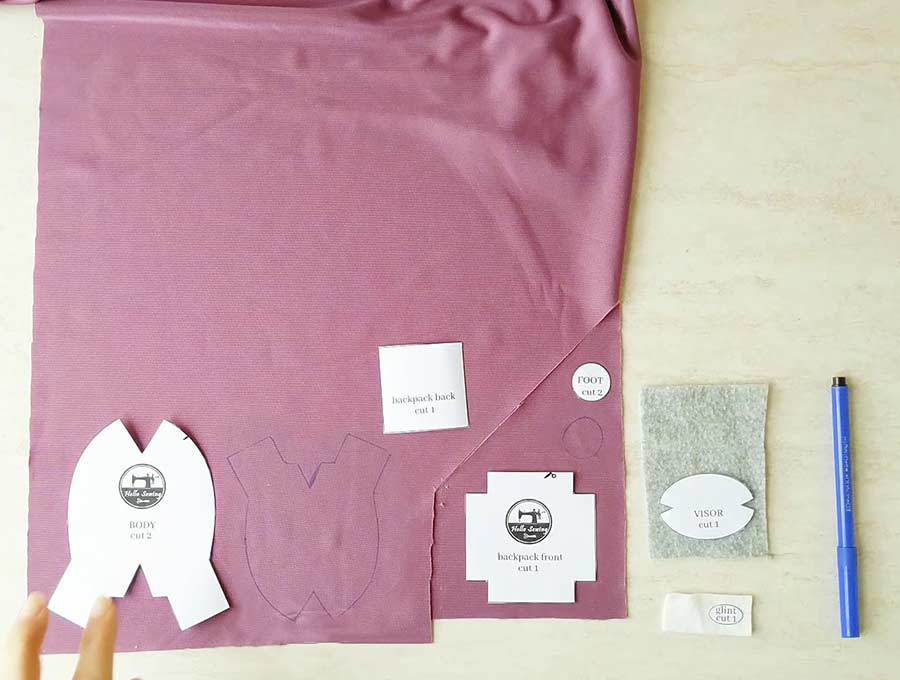 STEP 3: Cut out the fabric

Cut 1/4″ from pattern lines (except for the glint, that you cut according to pattern). If you’ve traced everything correctly, you will have 8 fabric pieces to work with. 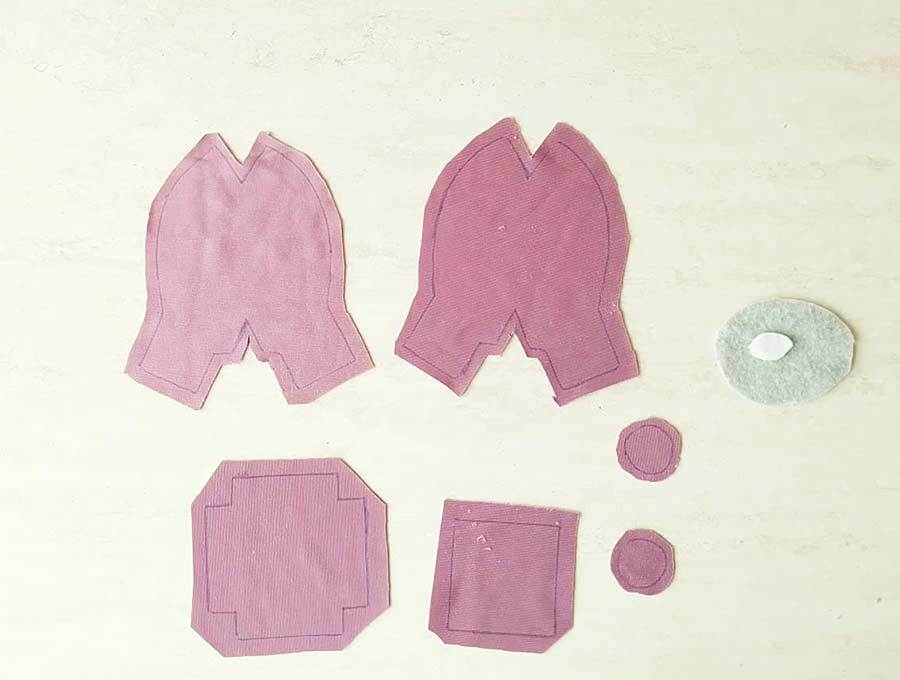 You will need to pin the first darts on the oxygen tank front and both main body parts.

These darts are so tiny that using this trick really helps 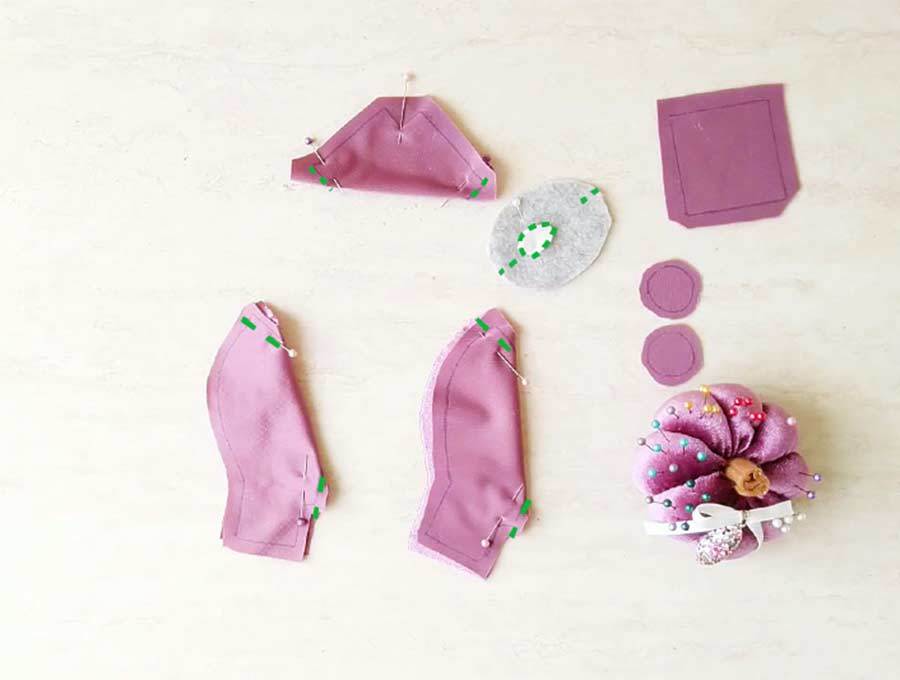 Now stitch the glint to the visor, and the darts of the visor, main body part and the oxygen tank. Do it in the following order. 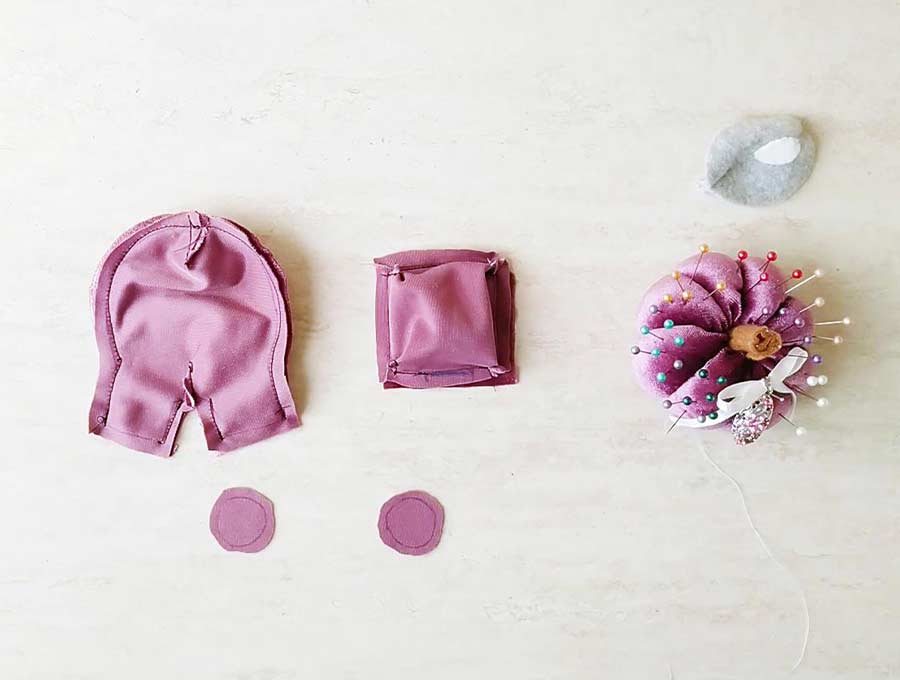 Pin oxygen tank back to the front part and leave 1-inch gap for turning. I usually mark this gap either with double pins or with a fabric pen. Sew around either using a backstitch or your sewing machine to speed up the sewing process a bit.

STEP 7: Sew the body of the crewmate plushie

Sew the plushie main body parts as shown and be careful to leave 3 gaps unstitched or you’ll have to use the seam ripper later (been there, done that) 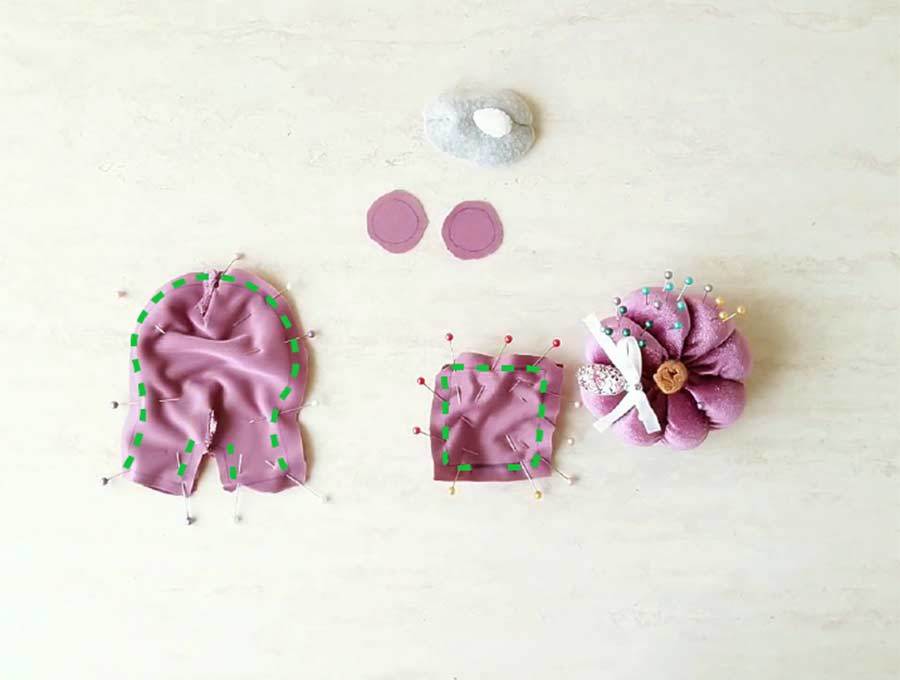 Pin the feet to the crewmate body and handsew using a backstitch. The feet are so tiny that I don’t recommend sewing them on a machine even if you have one, as it will be much difficult 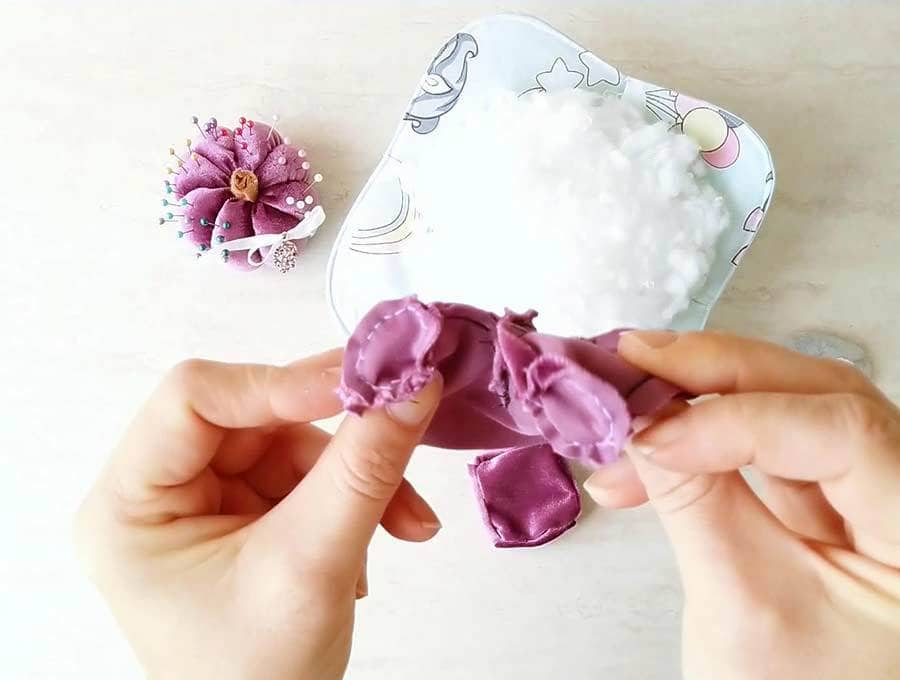 Turn the oxygen tank around

Turn the standing crewmate body right side out

Fill in the oxygen tank with the polyester stuffing. Do not fill it too tight, just enough.

Fill in the standing plushie body with the stuffing. Make sure to stuff it well and fill in the legs well – you will be surprised at how much stuffing it can take. What I like to do and it helps stuff easier and faster is to roll a handful of stuffing with my hands to deflate it a bit and then to fill it using my fingers. Watch the video to see how I do it. I have made quite a bit of stuffed animals (this sock monkey was the last stuffed animal I made) so I can now do it in my sleep, but if you are new to that you might learn a trick or two that will help you get through this part faster. 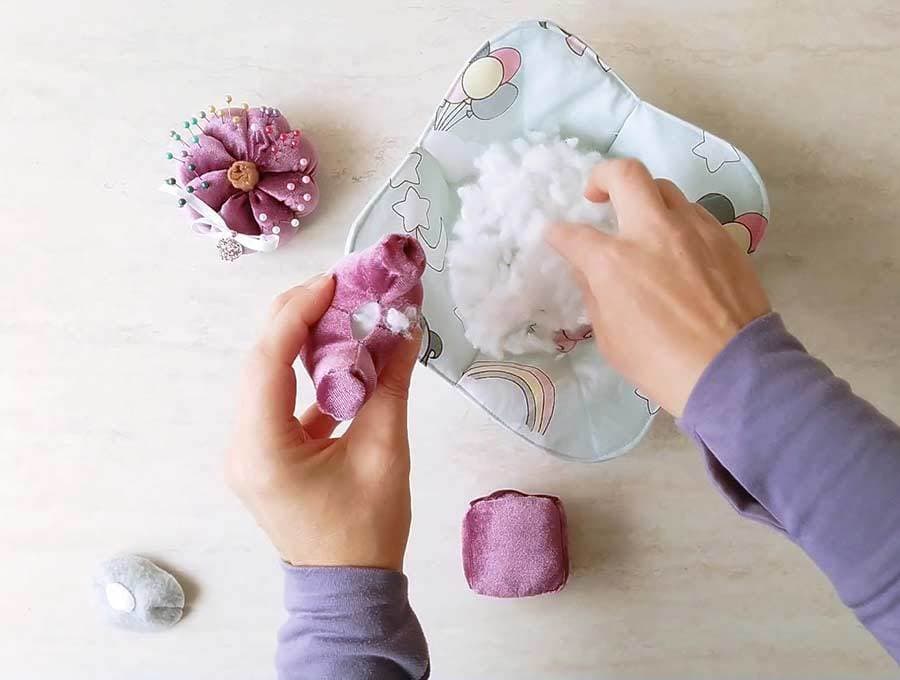 Sew the openings of the tank and the body using a ladder stitch. If you are new to this stitch watch the video carefully (you can slow it down in YT if you prefer). When you have stitched the gap, pull the thread to close the gap. Stitch a couple of times, then push the needle through the loop of the thread twice to make a knot. Push your needle through the plushie an inch or so from the end of the stich. Cut the thread and it will disappear inside the body 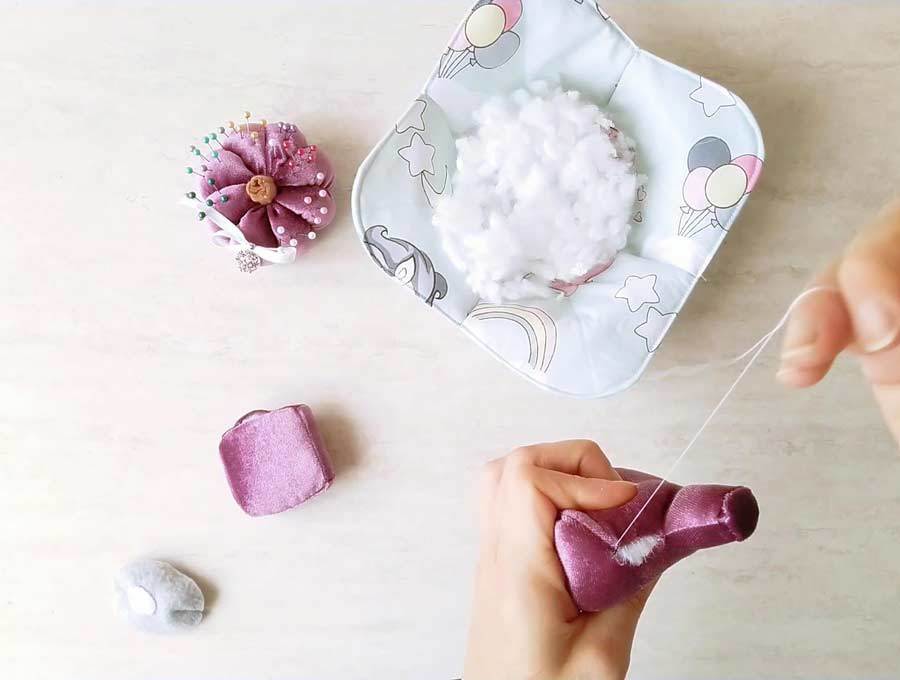 Pin the tank to the back of the crewmate using 4 pins – one on each side. Sew both parts together using a whipstitch (the most basic stitch) 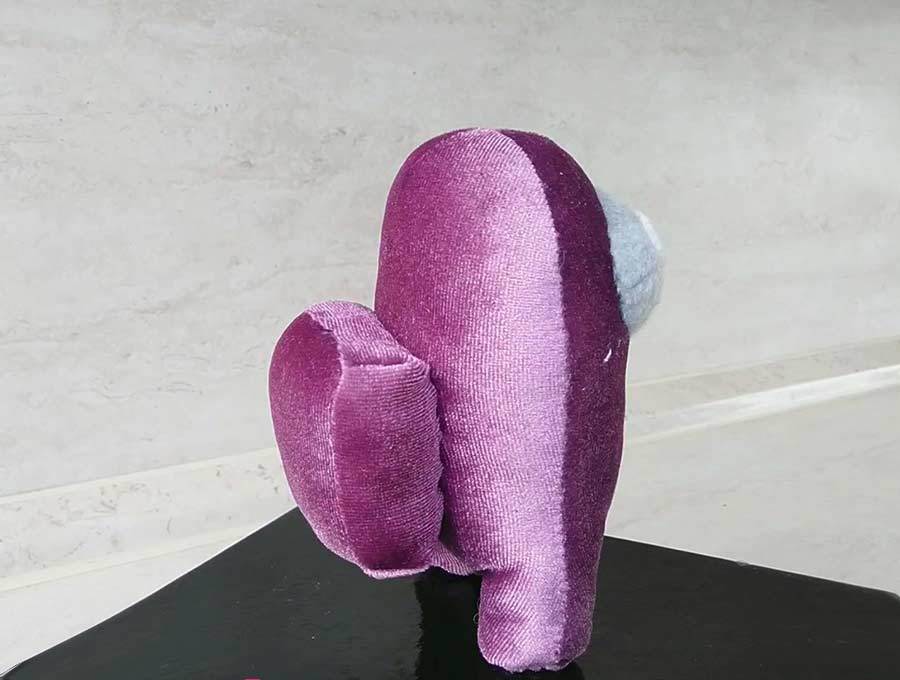 STEP 11: Attach the visor to the head of the crewmate

Make a running stitch around the visor and do not knot or pull the needle out of the thread. Pull the thread to gather the visor seam allowance slightly so you can fold it under. With the needle still attached to the thread, pin the visor to the head of the crewmate. Make sure it is centered horizontally. Now sew around the visor to attach it to the body. Stop 1/2 inch from the beginning, stuff the visor with a bit if polyester stuffing and then proceed to sew it closed. 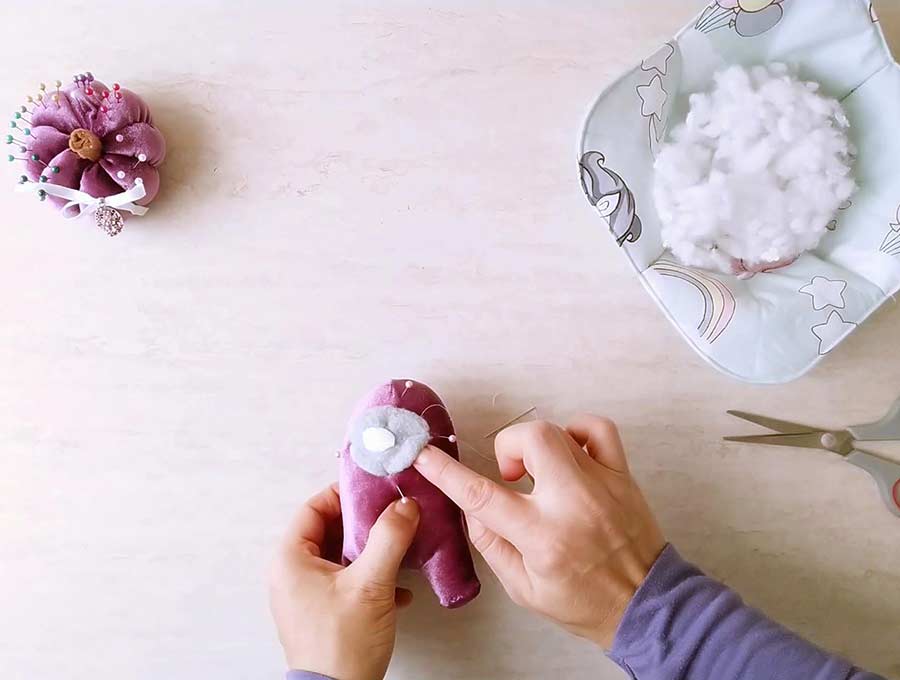 Voila! The purple among us plushie is ready.

It’s adorable, isn’t it? My standing crewmate looked so lonely that I decided to make him a pal (pink crewmate). They spend all their time together, taking up tasks and looking for the Imposter among us. They seem stuck as he is nowhere to be found. 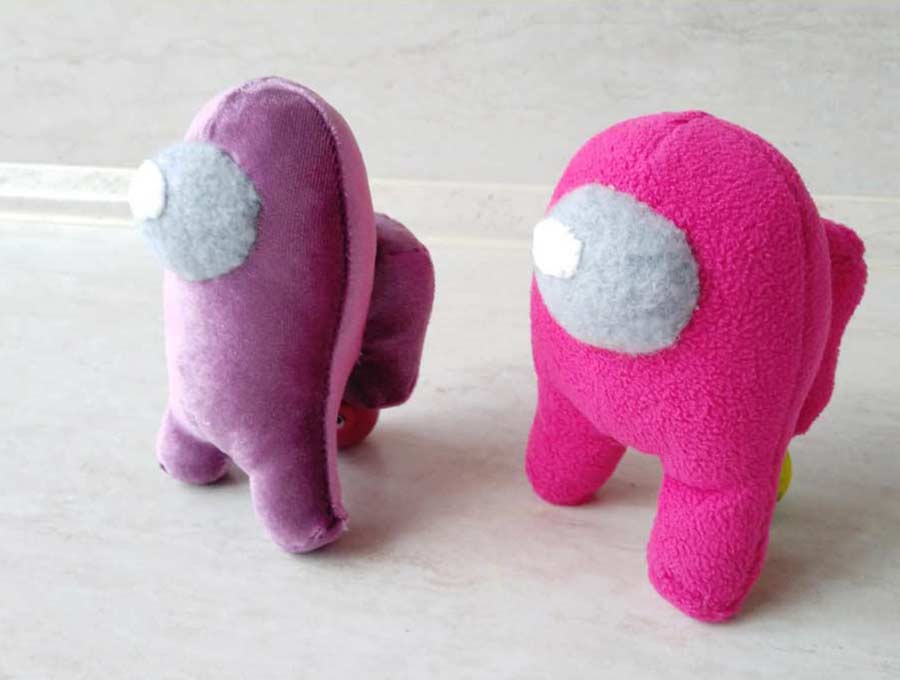 Shh.. I must have admitted I am yet to made it, but it breaks my heart to do it. Do you think I should make the Impostor plushie and if yes – what color will suit him best?

UPDATE: Thanks for voting. Here’s the Impostor plush pattern

My crewmates keep searching so hard to find it that I think they deserve to find him. Let me know your thoughts in the comments. I would love to know what you think.

Did you make the Among us standing crewmate plushie? I made the crewmate plushie pattern with as little parts to sew as possible so that even a complete beginner can make it. At the same time, I tried to keep the original look. The first crewmate I made had his feet too far apart from each other, and looked like he was squatting, and his oxygen tank a bit too high on his back. Don’t laugh at me – I thought it was a backpack… The teen pointed the flaws immediately and I fixed them. Ahh.. you live and learn. 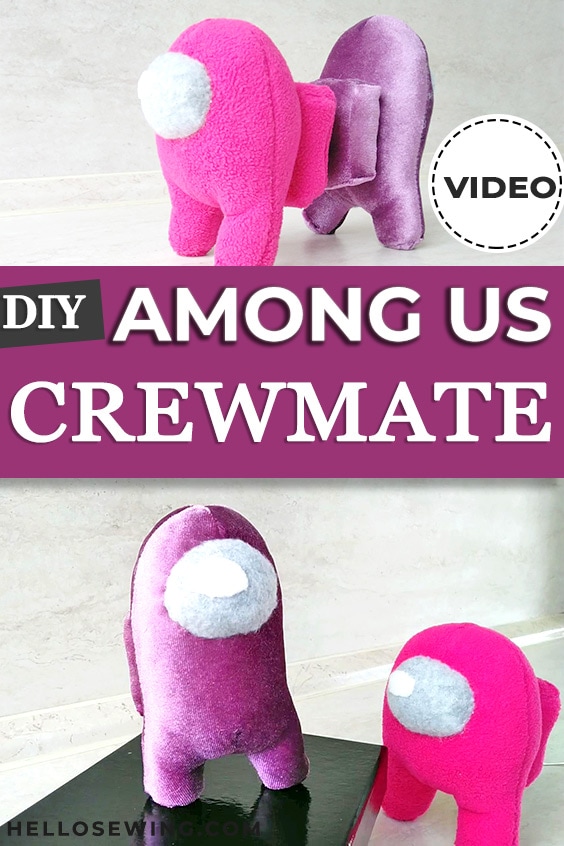 DIY elf on the shelf clothes

How to Make an Oven Mitt – FREE pattern and VIDEO

How amazing are these! Great tutorial #KCACOLS

So cute ! Thank you for sharing with us at Meraki Link Party.
Much love
Naush

Oh my word, so cute! My kids love Among Us but I am completely unfamiliar with the characters. These little plushies are just too adorable! Thanks for sharing and linking with me.

How cool! Thanks for sharing your pattern #KCACOLS

I have to admit I have no idea what these characters are since my kids are no longer teenagers, however, they look cute and you did a great job of making these. Thanks for sharing with us this week. #HomeMattersParty

I made the crewmate with a few changes. I sewed it all by machine except attaching the oxygen tank. I left a hole in the side for turning. Oops, I got the glint in the wrong place! I fused it on using Heat N Bond, no sew. Thanks for the pattern and tutorial. My Grandson will live it.

These are so fab, my kids would love it if I could whip up one of their favourite characters xx #KCACOLS

Thanks for sharing your really helpful pattern. I am not familiar with the game but have heard it mentioned a few times. I love that your son asked you to do this and you were able to look at it with him. Thanks so much for linking up at #KCACOLS. Hope you come back again next time

I have made 1 out of at least 5 of these which I’m giving as Christmas presents! It’s so cute and the instructions are very straightforward. Thank you for this pattern, my friends are going to love these!!

Will these stand up on their own? What dimensions is it finished?
Thank you.

They are approximately 14.5-15 inches depending on what fabric you’ll use and how much you’ll stuff it.
They are not ‘self-standing’. You can lean him on his oxygen tank or against a wall
I’m guessing a little weight in the feet might help them stand on their own. Also when stuffing you could stand it up and move the weight around until it’s standing! Someone else can probably advise you much better!

“And finally -if everything else fails then ask mom or granny to do it for you.”
WOW OK THATS STRAIGHT UP SEXIST

It’s not meant to be 🙂 It was just a friendly advice from a mom, no need to be so rude

I'm a hopeless craft and coffee addict. Welcome to HelloSewing where you can find all sorts of sewing projects, ideas and product guides powered by creativity and passion. Happy sewing!