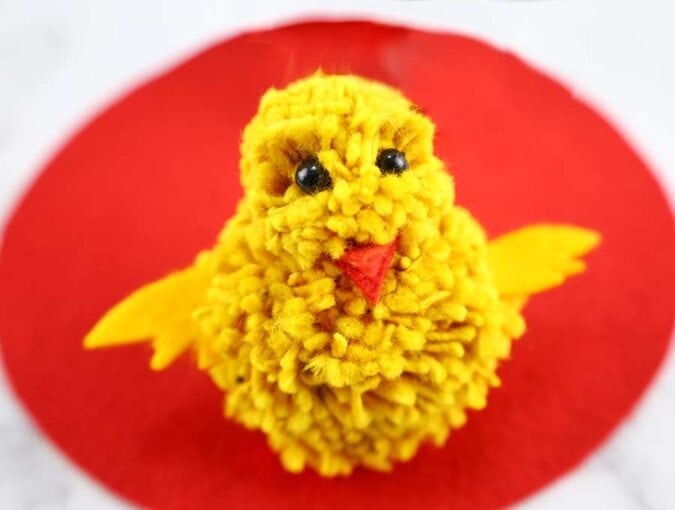 How to Make Pom Pom Chicks Using Your Fingers

These pom pom chicks are so cute with their chubby bodies, tiny beaks and wings.

I love these fun DIY yarn crafts. The best thing is that you don’t need any fancy tools to make these DIY pompom chicken. All you need to make the pom poms is yellow yarn, scissors and your hands! Pretty clever, ha!

These handmade yarn chicks make cool toys for the little ones. The yarn chicks are so easy to make that even the smallest of crafters can make them. This is one of those Easter crafts that is ton of fun and the end product is irresistibly adorable. Let’s dive right in and I’ll show you step by step how to make a pom pom chick using your fingers. You can use the same method to make these adorable pom pom bunnies and jazz up your Easter home decor. 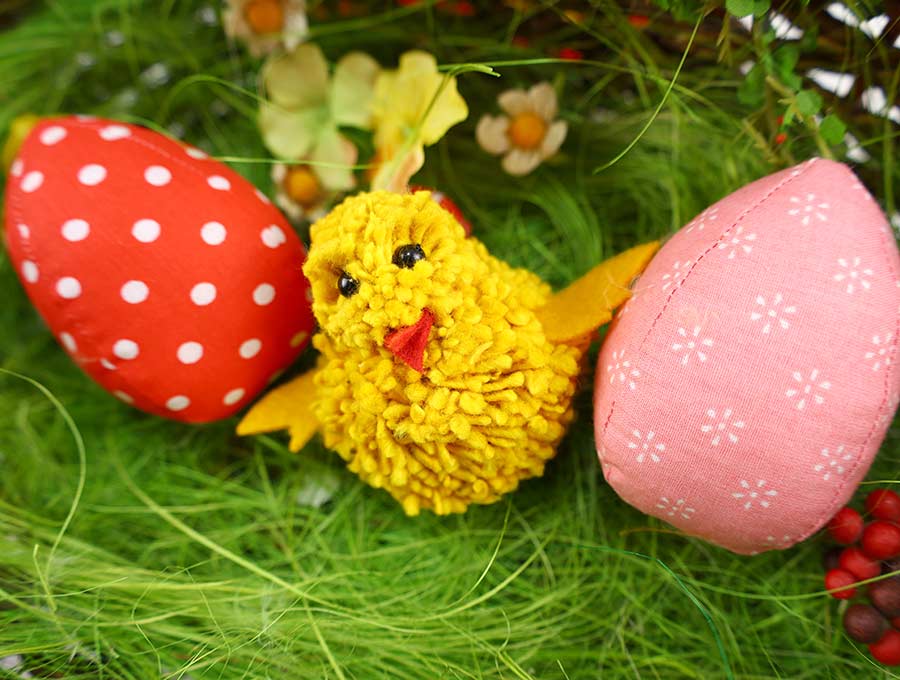 Below you will find my step by step written yarn chicken tutorial with VIDEO instructions for all the visual learners.

How to make Pom Pom chicks 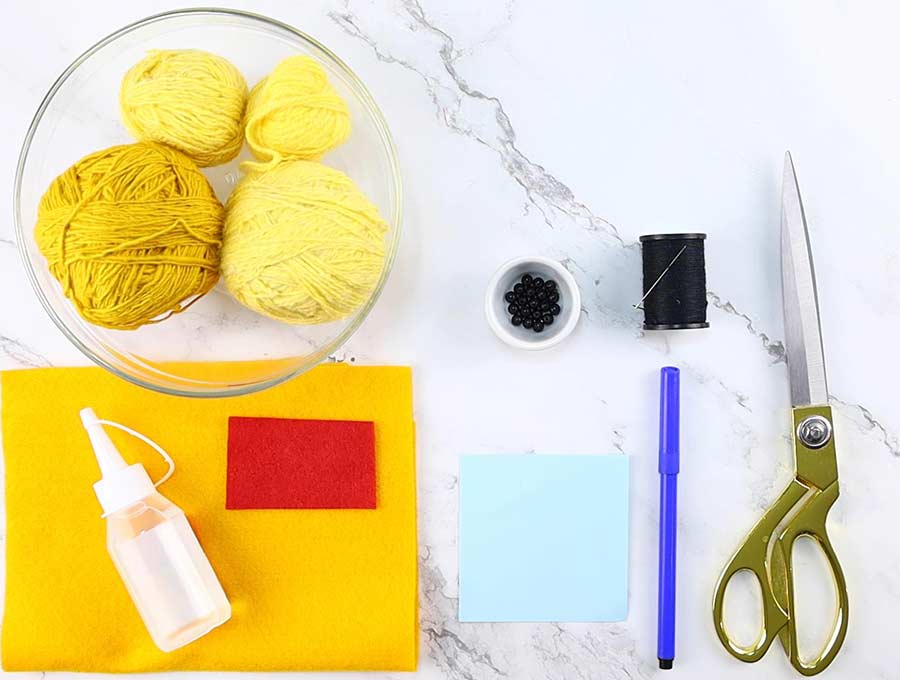 Watch the diy pompom chick video first and then follow the written step by step instructions below.
Please enjoy and don’t forget to Like and SUBSCRIBE over on YouTube to be kept up to date with new videos as they come out.

First – gather your supplies. You can use either standard yarn or chubby yarn. If you choose to use the latter, you won’t have to wind it so many times and it will be a bit faster. No matter what yarn you choose to use, you need to wind it enough times to make a full and fluffy looking pom pom. I’ll go into the details below.

The small pom pom will become the Easter chick’s head.

First, cut out a piece of yarn  ~10 inches (25cm) and place it on your workspace. Then start winding yarn around two of your fingers. 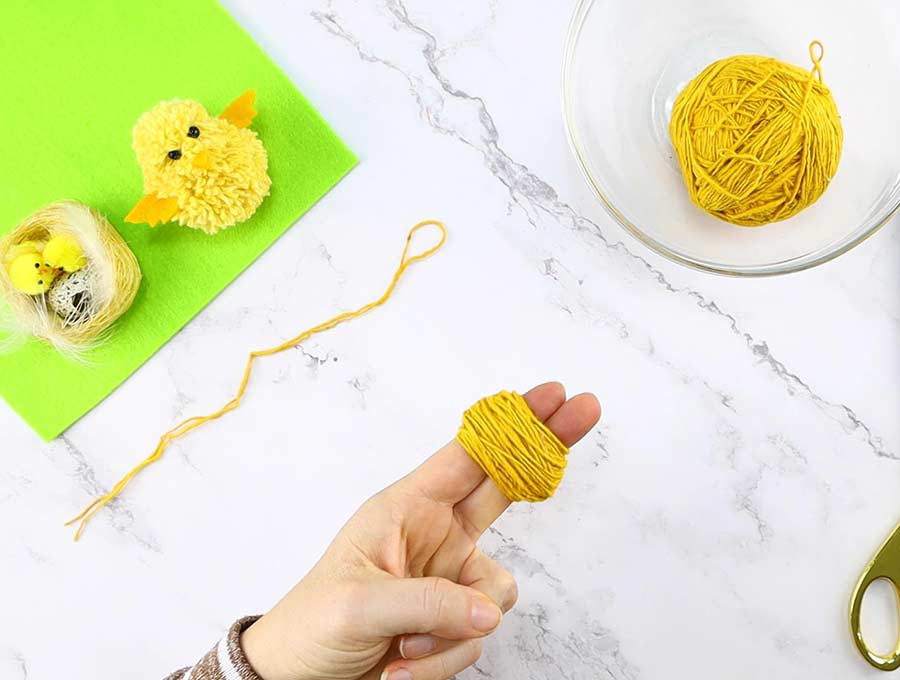 Slide the yarn off your fingers carefully, so that the loops won’t fall apart. Take the string of yarn you cut at the beginning and tie it around the middle of the loops. Make sure to tie it tightly with a knot to secure it in place. You need to pull the ends of the yarn strand as hard as you can. 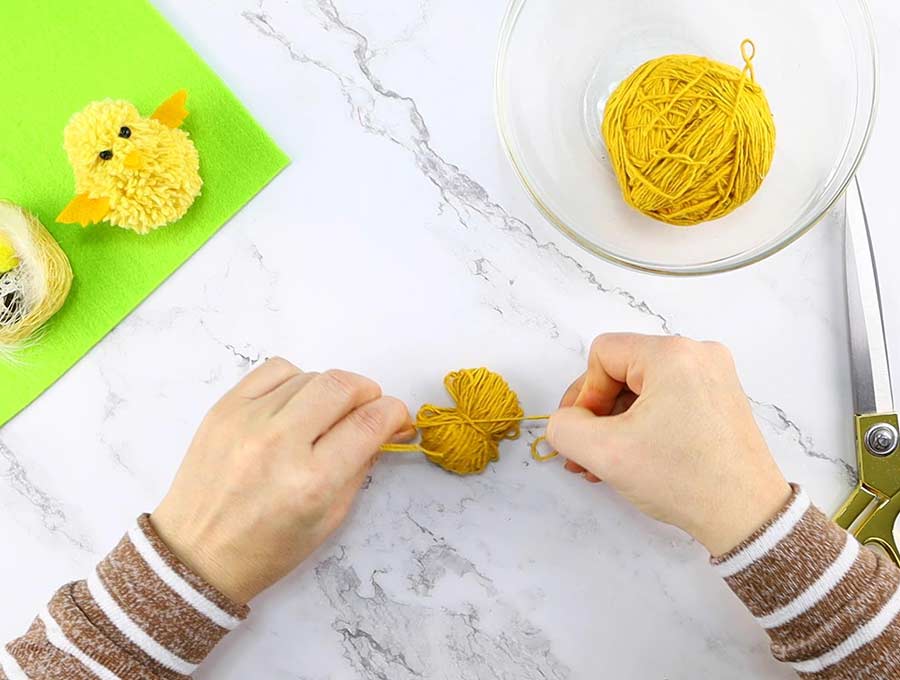 TIP: If the yarn strand breaks for some reason, cut out a piece that is twice as long and just double it.

Cut all the loops through the middle using a sharp pair of scissors. Work your way around the whole circle. 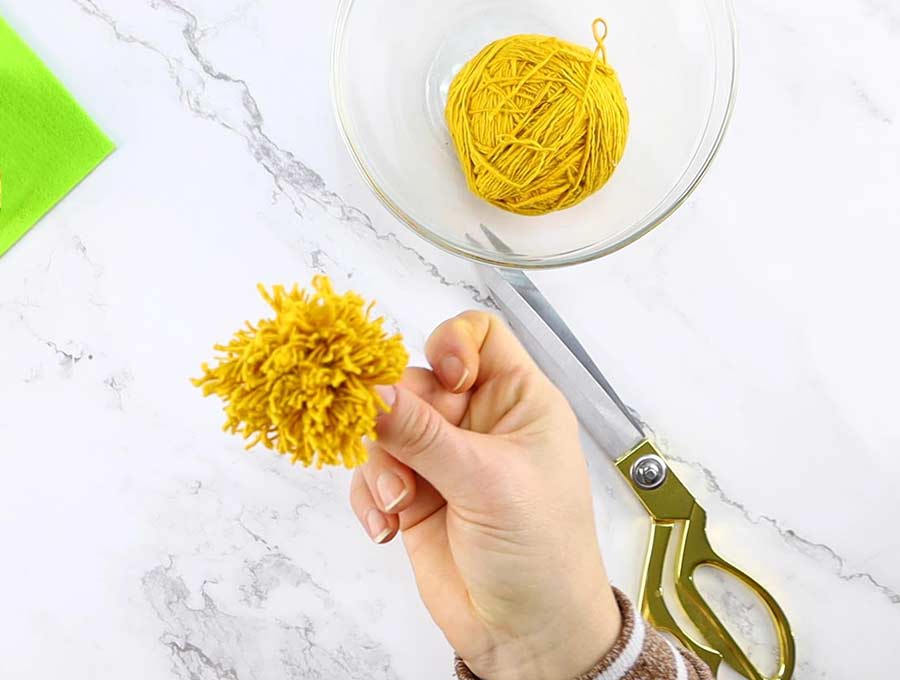 Now trim and shape the pom pom until it’s even and looks like a perfect ball. Trimming the pom poms takes about 5-10 minutes per pom pom. Taking your time to trim the ball will produce better looking pompoms.

Repeat the same steps to make the larger pom pom that will become the body of the pompom chicken. This time wrap the yarn around your hand instead of your fingers and wrap it about 120 times for the regular thread yarn and 100 times for the chunky yarn. 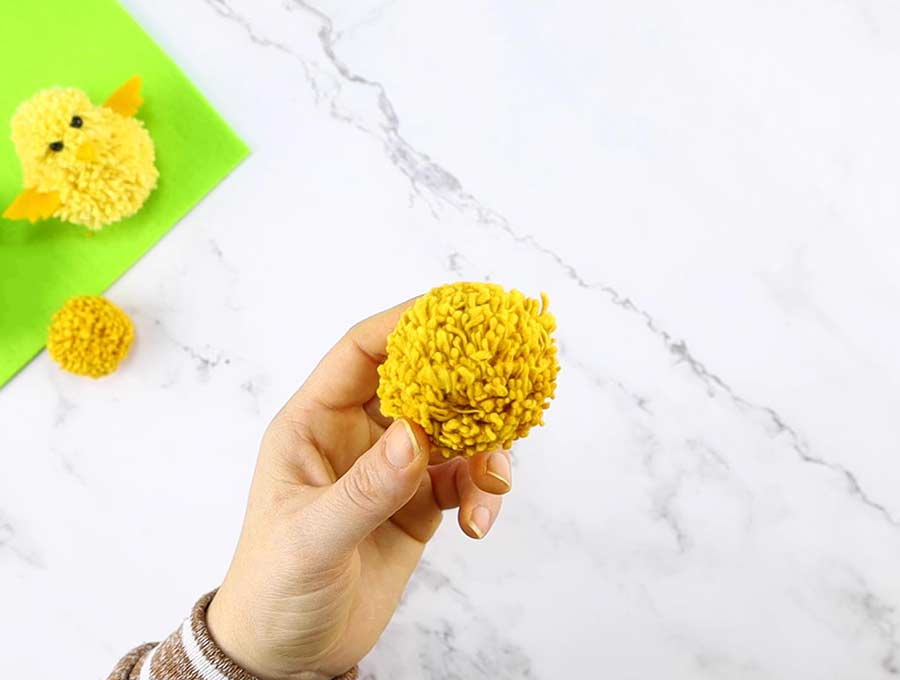 TIP: Trimming the pom poms is a bit messy, so make sure to get a newspaper or an old sheet

Glue the head of the chick to the body. Use a generous amount of glue on one of the pom poms and then carefully press the second pom pom on top of it.

You can use either silicone glue or hot glue gun to glue the pompoms together. Let the glue cure. 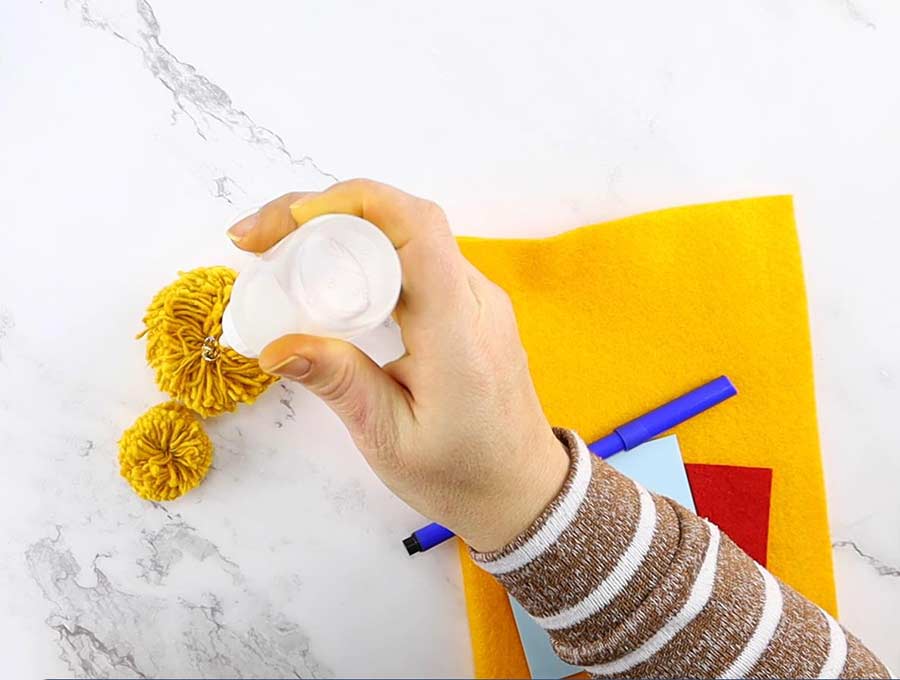 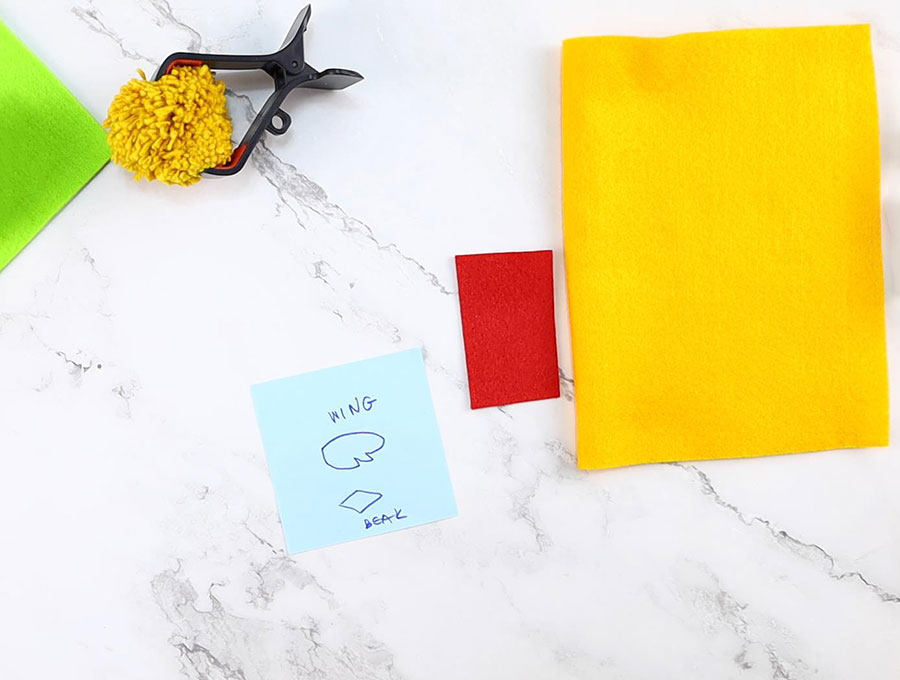 STEP 5: Cut out the felt

Cut out your paper pattern and use it to cut out wings and beak from felt. You’ll need two wings and one beak per yarn chick. 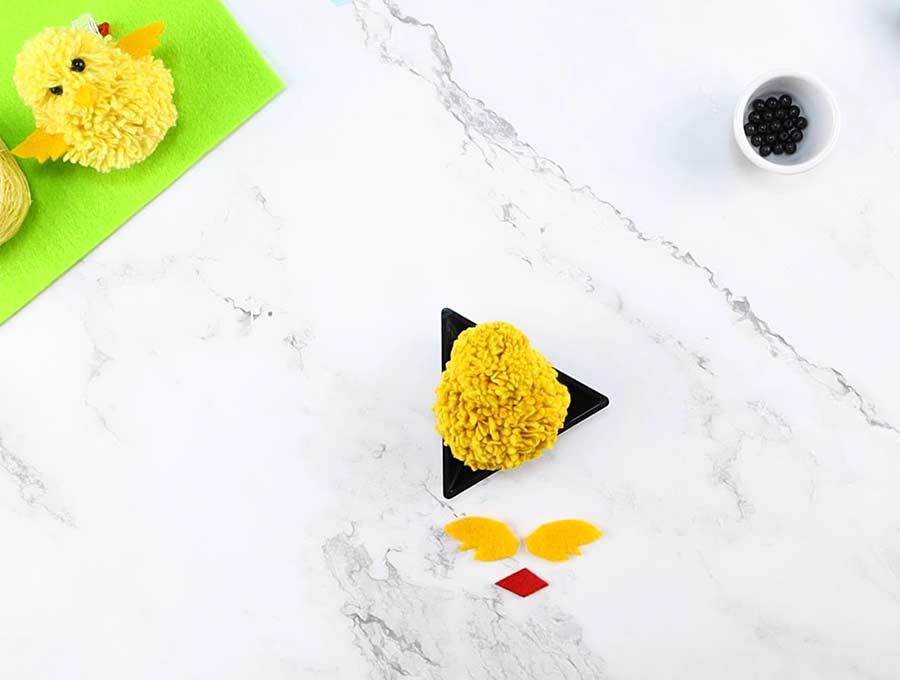 STEP 6: Attach the wings to the body

Use a small dab of glue on either side of the yarn chicken to glue wings to the body.

STEP 7: Attach the beak to the face

Add another small dab of glue in the middle of the beak and press the diamond closed. Now add another dab of glue on the outer side of the fold and glue the beak to the face. 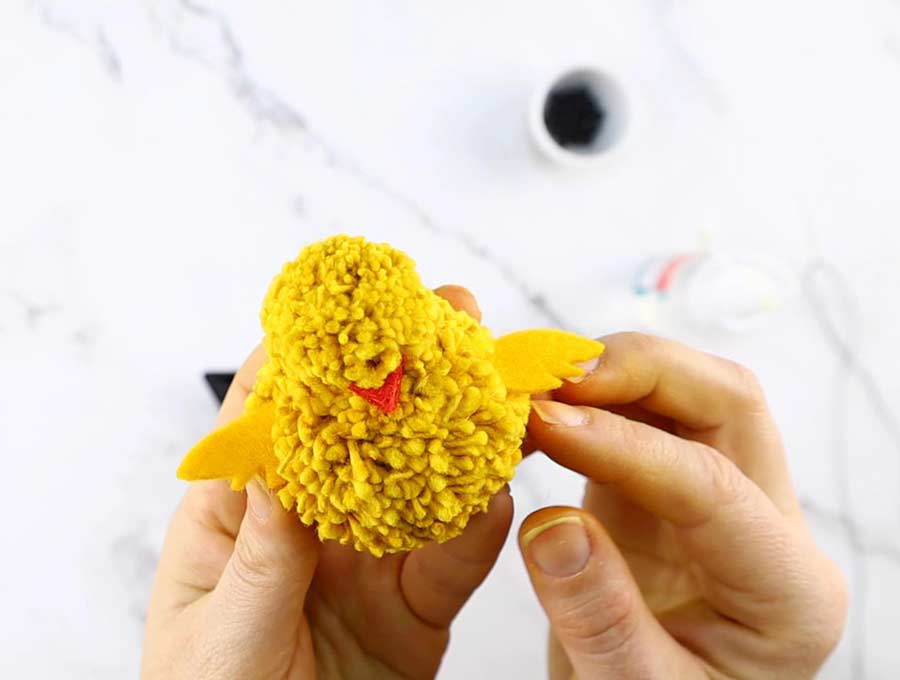 STEP 8: Attach the eyes to the face

Glue or sew the eyes to the head. I’d like to sew them just to be on the safe side, but it is fine if you decide to glue them to the face.

Don’t stop at just one. Pom pom chicks look so cute in pairs, and I made a basket full of fabric easter eggs and creatures. They look soo adorable together and make gorgeous Easter home décor. Plus the kids like to play with the yarn chicken which makes my heart melt. 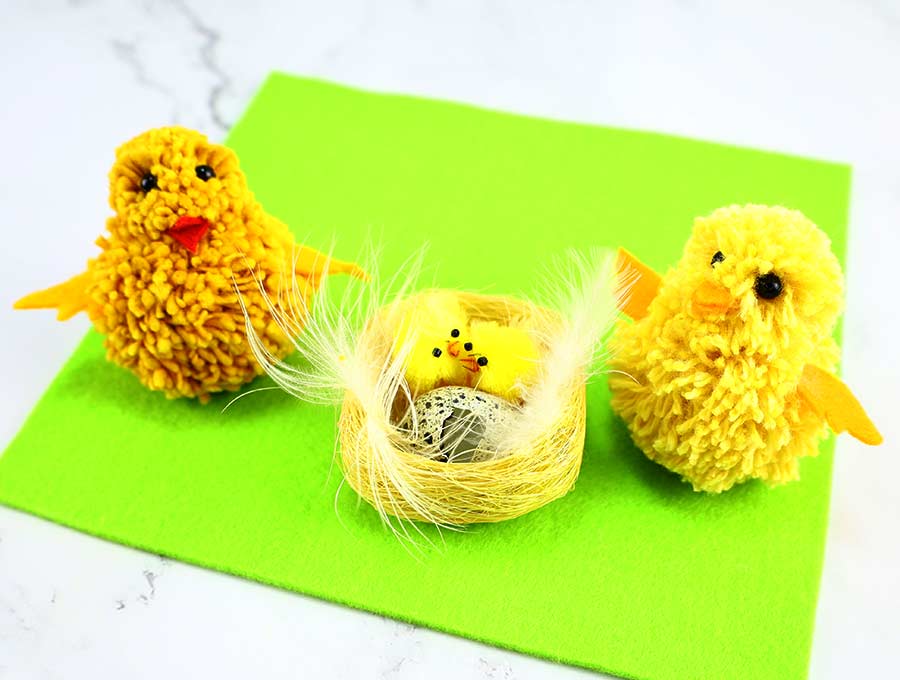 Do you like this Pompom chick DIY? Pin for later: 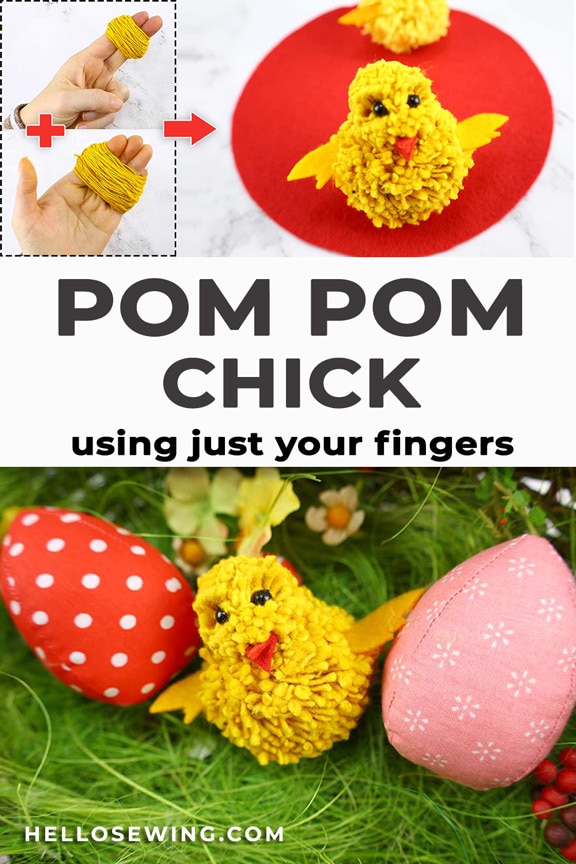 How to make a Quillow (Blanket in a Pillow)

Very cute. My sister used to make pom pom toys for us when we were kids. Glad to see them making a come back.

Your little pop pom chick is so cute! (All of your pop pop critters are cute!) Thanks so much for sharing this at our Party in Your PJs link party.

A lovely and simple craft for Easter, thanks for linking with PoCoLo, do pop over to the other posts and share the love back with a comment or two

Oh, what little cuties! I love these whimsical little chicks so much! Thanks for sharing and linking with me.

Helen, the pom pom chick is stinkin cute !!
Thank you for sharing with us at Meraki Link Party. Delighted, you could join us.
Much love
Naush

Another pom pom cutie! This is SO sweet and so perfectly spring!

I’ve featured this fab project in this weekend’s DIY Salvaged Junk Projects. Thanks for linking up!

I’m thrilled to see this pom pom chick featured on your lovely blog. Thank you, Donna

Stop by the Little Cottage Link Party tomorrow. You are being doubly featured!

Will do! Thank you so much Kristie! I’m all smiles

These are adorable! Thank you for the tutorial. I’ve pinned this to my Easter board!

Thanks so much for joining the Grace at Home party at Imparting Grace. I’m featuring you this week!

Brilliant – these brought back happy childhood memories too! Thanks for sharing with #PoCoLo