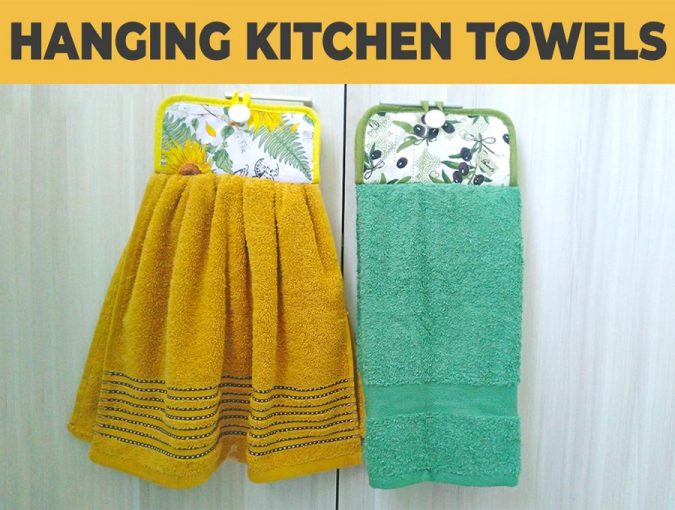 How to Make Hanging Kitchen Towels (2 ways – Gathered or Folded)

You can never have too many kitchen accessories, especially if they’re all useful and unique, or if they combine two things into one. Like these hanging kitchen towels that are also pot holders.

You can hang one or more of these on your fridge and you’ll always have something you can quickly wipe your hands on as you work in the kitchen. And when you need to grab hot pans, you can just use the other part of the pot holder towel! 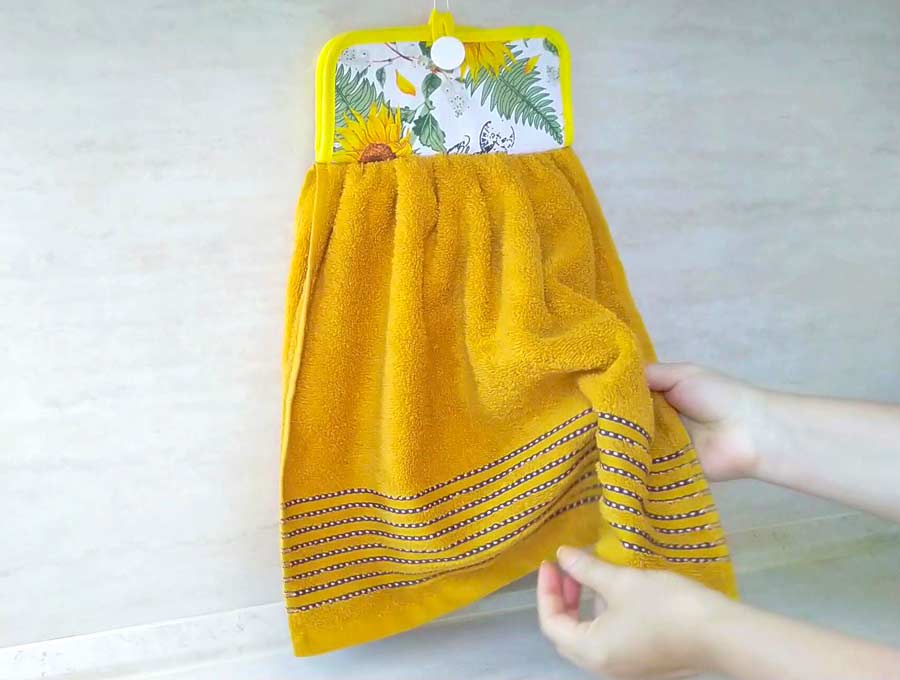 How to make hanging kitchen towels 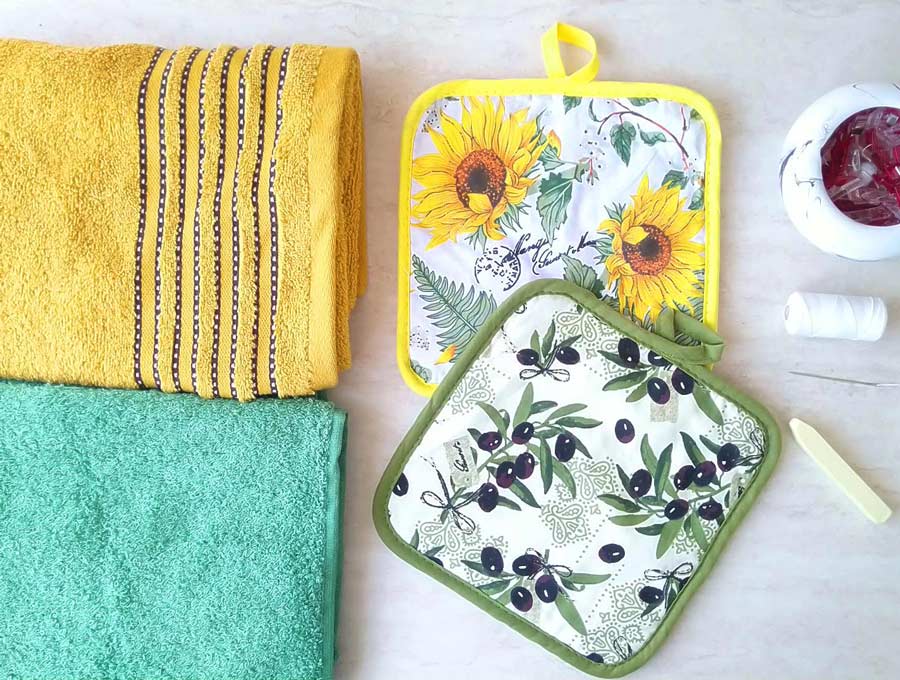 How To Sew a Pot Holder Towel

Watch the diy hanging kitchen towels video first and then follow the written step by step instructions below.
Please enjoy and don’t forget to Like and SUBSCRIBE over on YouTube to be kept up to date with new videos as they come out.

There are two ways in which you can make these DIY hanging kitchen towels. We’ll start by explaining the towel gathering method first.

Fold the towel in half so that its shorter edges meet. Press the towel like that with a hot iron. The crease that has been made this way will be the line for the gathering stitch.

You can also measure out the middle and then draw a line along it with a washable pen if you find that easier. 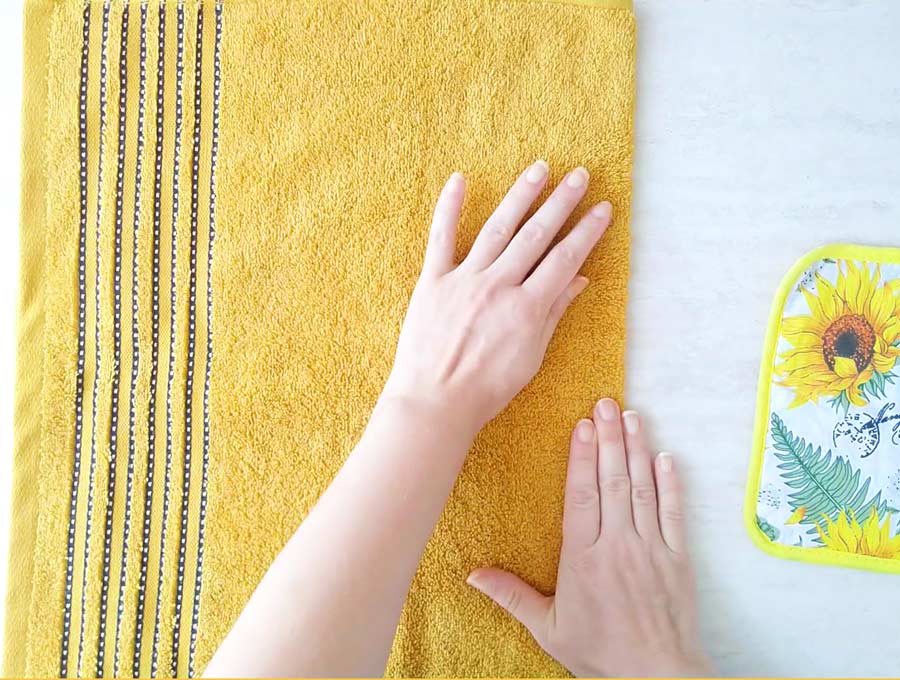 You can do this either by hand or by machine. 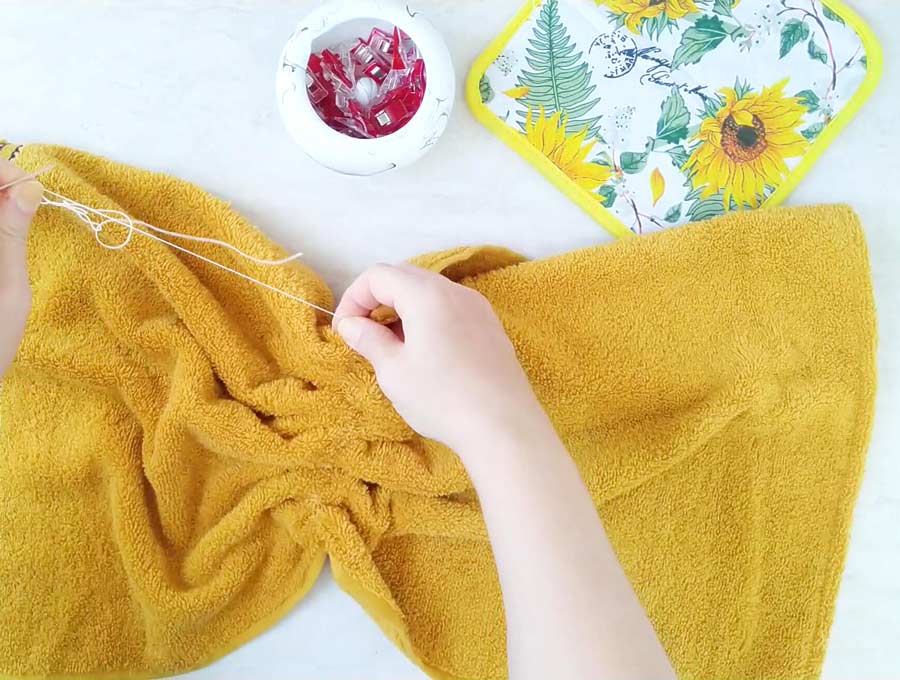 Grab the thread on one side of the towel and hold it firm. Pull the fabric away from the thread to gather it. When you reach the desired gather length, knot the thread and cut off the excess. Do this on both sides of the towel.

The gathered towel should be equal in width to the pot holder after this step.

You need the crease across the middle. If you don’t want to fold and iron, just measure out the center and draw a line with a washable fabric pen.

Place the pot holder over the towel with their right sides facing each other and the creases aligned. Use some pins or clips to secure the two together. 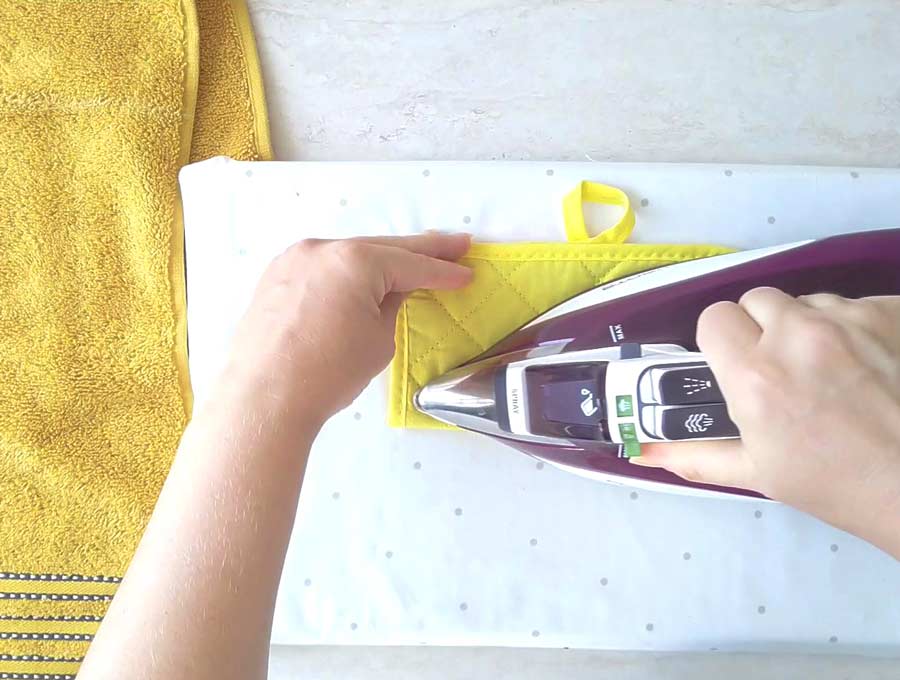 Make the stitch along the crease, flip the pot holder away from the towel 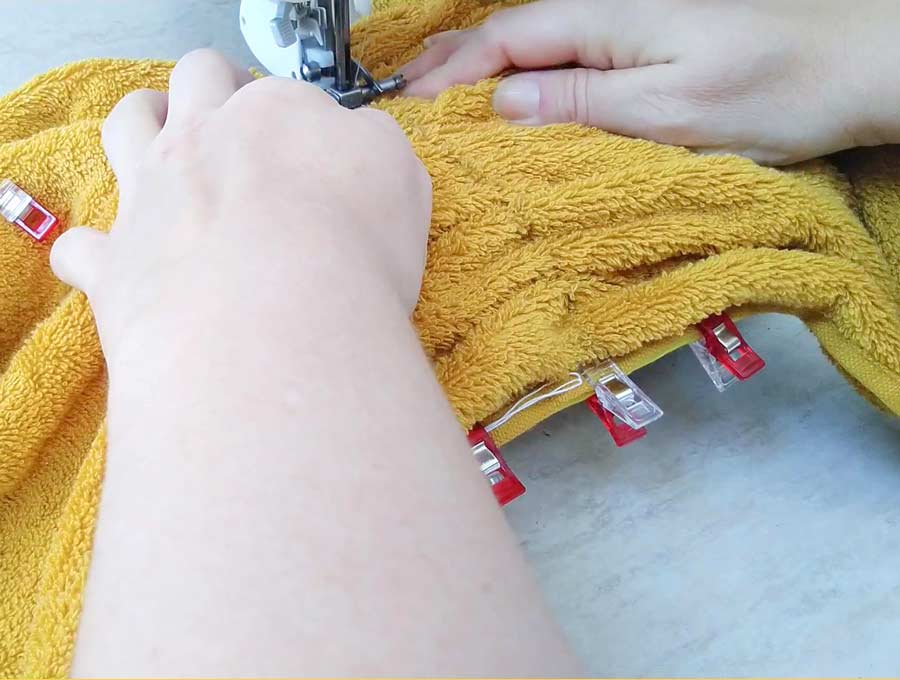 Fold down the potholder loop to mark the placement of the button. Thread a needle and knot the end of the thread. Sew on the button. 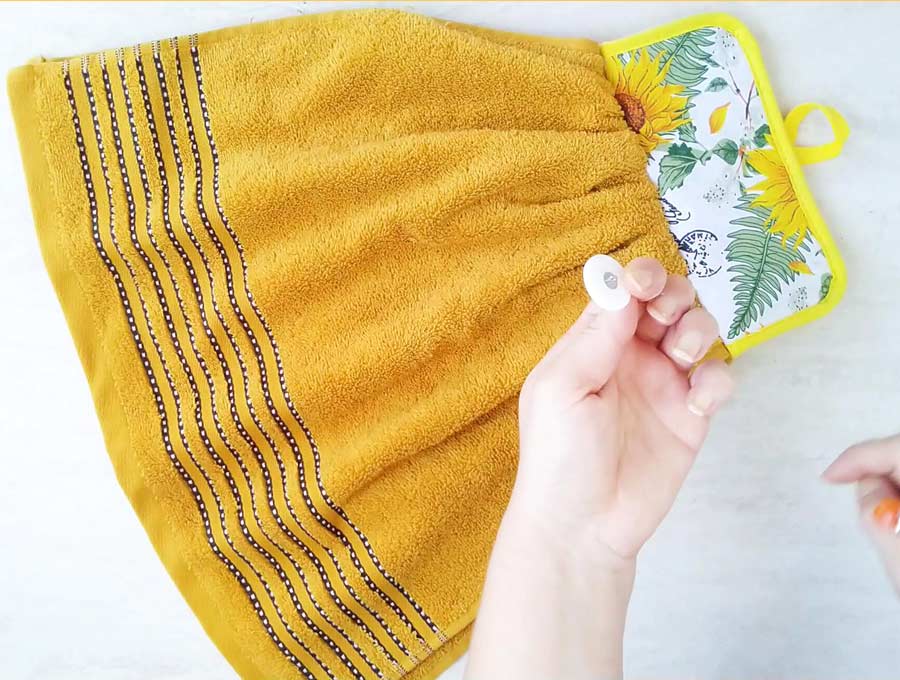 STEP 1: Fold the towel in half

First, fold the towel in half so that the short edges meet. Finger press or press with an iron to create a crease

Fold the potholder in half horizontally and press with an iron. You are doing this to find a middle on both parts so that you can align the two with each other more easily.

STEP 3: Fold the towel in three

Fold the towel in three equal sections vertically. Once it is folded like this, the towel should be equal in width when compared to the pot holder.

Place the pot holder onto the towel, facing their right sides towards each other. Secure everything in place with some pins or clips.

Make a stitch along the crease and make sure to reinforce it with some backstitching. You want the seam to be durable because you’ll wash the towel pot holder a lot over time.

Since the stitch needs to go through a few thick layers, use the right needle and a heavy-duty sewing machine if you have one.

As the last touch, sew on a button onto the top middle section of the pot holder. Use a big enough button to secure the pot holder yet small enough to pass through the loop on the holder.

Your new kitchen accessory is ready for action! 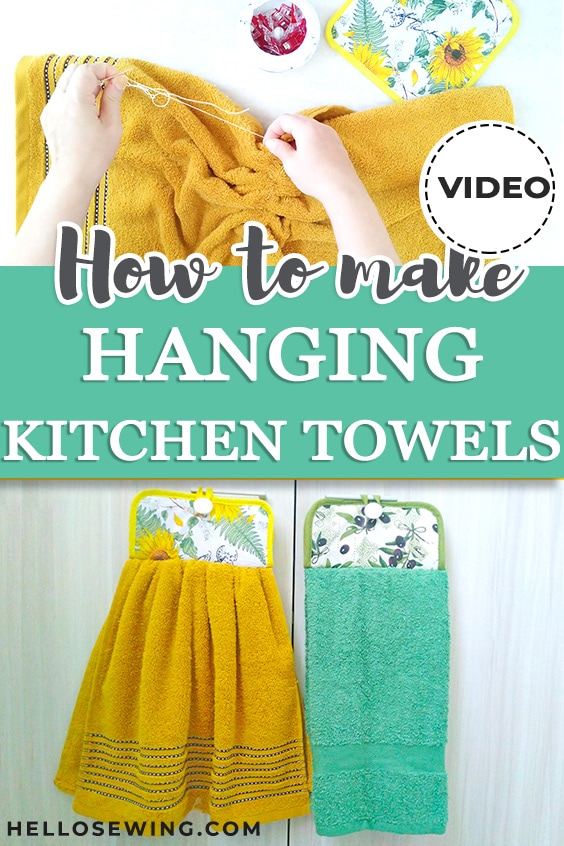 How to Make Mini Oven Mitts (with FREE pattern)

i loved this project, will make as gift for my family

Yes I love this project! I give them to family every chance I get (hope they find them useful as I do). I have trouble mastering my buttonhole on my handme down Singer and folding them is easy enough for me. Thanks for sharing the project♥♥

You are welcome, Susie

I love this idea, made lots several years ago for gifts, might be time to make them again.

Love these and especially how you offer 2 options!

Glad you liked it! I wasn’t sure whether to go with just one, but I loved both so here they are

These are so great! Hanging towels are so great for ease and for hygiene! Thanks for sharing and linking up with me.

These are so sweet and give a nice vintage vibe! Thank you for sharing at Embracing Home and Family!

I like these towels! I have a few that a young girl made for me, and they are really nice! I can’t wait to dig them out to use in our cabin, once we get it built. 🙂

Clever idea, and would look really sweet in a retro style kitchen. Although of course depending on colours and patterns used, they could fit into any decor. Thanks so much for linking up with #KCACOLS, hope you come back again next time! x

Great ideas. I always like my towels neat so thus is a great idea. #kcacols

how do I make these instructions and patterns printable?

You can copy and paste them in a Word document, remove what you don’t need and print from there