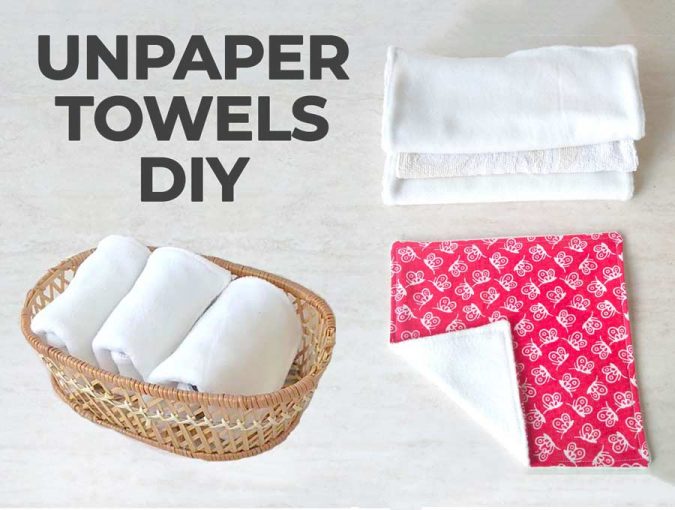 Unpaper Towels DIY: How to Make Reusable Paper Towels for Your Kitchen

Thinking about making the switch to unpaper towels in your home? That’s awesome! It’s even easier than you think and you can make a full set of reusable paper towels in just half an hour! Let me show you how ridiculously easy this unpaper towels DIY is, but first.. a confession..

Another thing I realized is that those things cost a lot when you add up the monthly tally for them. And I sure wasn’t going to keep paying for something that causes additional mess for me and cost quite a bit. So I decided to make a reusable alternative and that turned out to be one of the best decisions I have ever made. It’s environmentally-friendly, practical, and economical. Plus, they are ridiculously easy to make, as you’ll see in this tutorial. 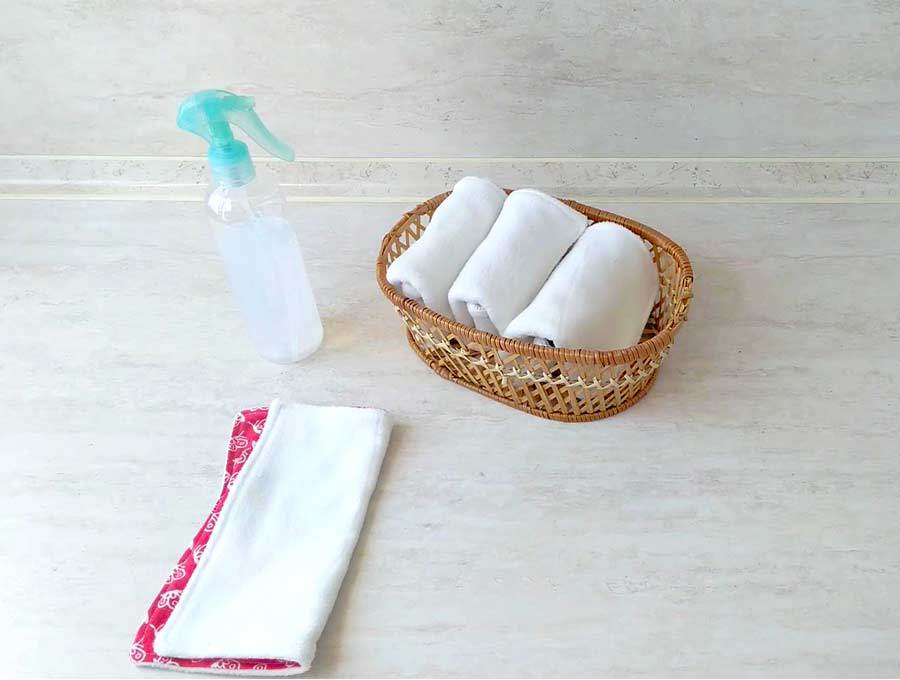 Below you will find my step by step written unpaper towels tutorial with VIDEO instructions for all the visual learners.

How to make unpaper towels 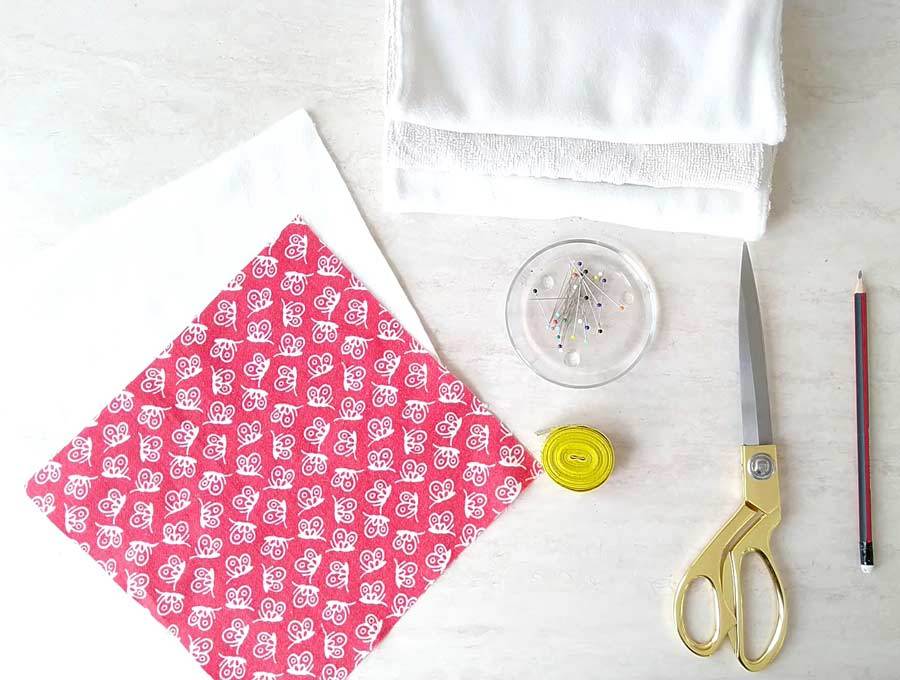 *Notes: You can use whatever fabric you have on hand for truly zero-waste reusable towels. Old towels, old flannel or cotton t-shirts, linen napkins. Mix and match these as you feel fit for your kitchen.

How to make reusable paper towels

Watch the diy cloth paper towels video first and then follow the written step by step instructions below.
Please enjoy and don’t forget to Like and SUBSCRIBE over on YouTube to be kept up to date with new videos as they come out.

Preparations: Pre-wash your fabrics in hot water. This will cause any shrinkage that could happen later on to happen right away, which means that the towels won’t get deformed the first time you put them in the wash after making them.

Cut 10 x 10 inch square from each of your fabrics. (you can slightly upsize or downsize if you prefer, I found that 10 x 15 inches is also a good size) 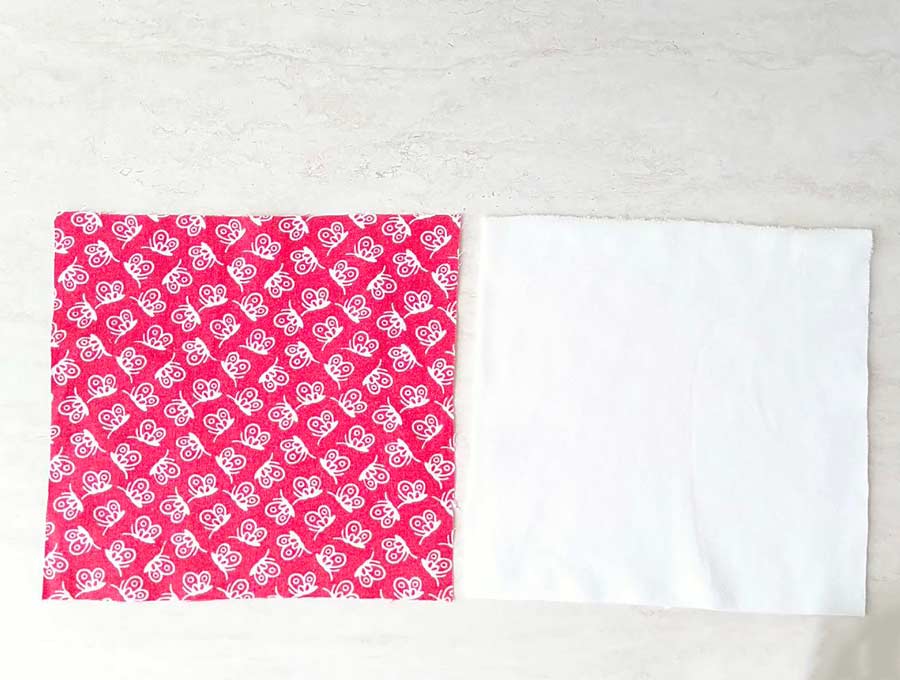 Put the two pieces on top of each other, pretty sides facing each other, and pin them together.  Make sure to leave a small opening of about two inches to turn the towel inside-out later on. I’d like to mark this opening with two pins together at the beginning and the end of the opening so I can remember to leave it unsewn. 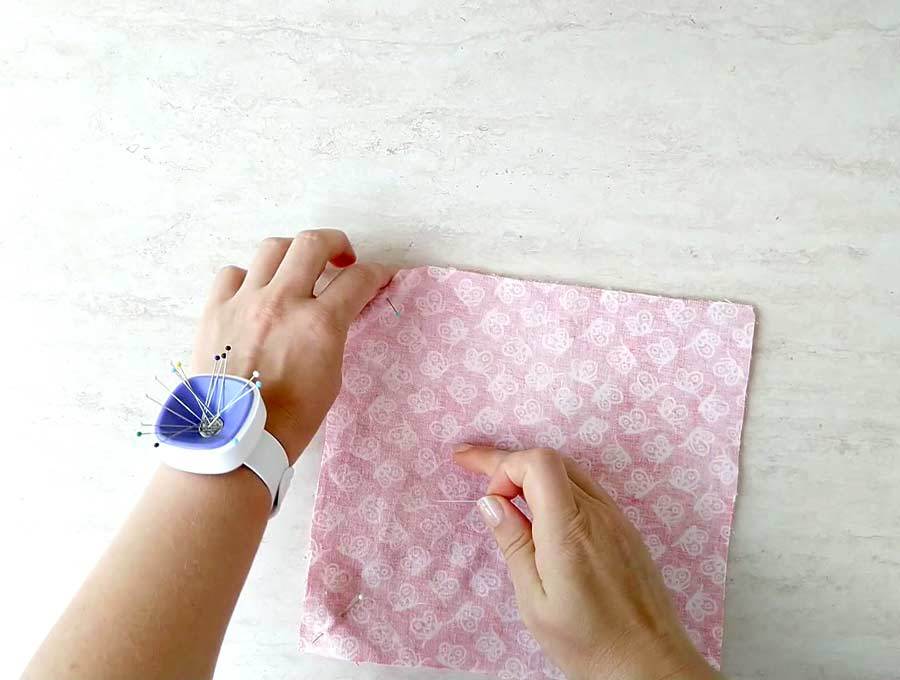 Stitch around the edges to join the two fabrics, using a 3/8″ seam allowance. 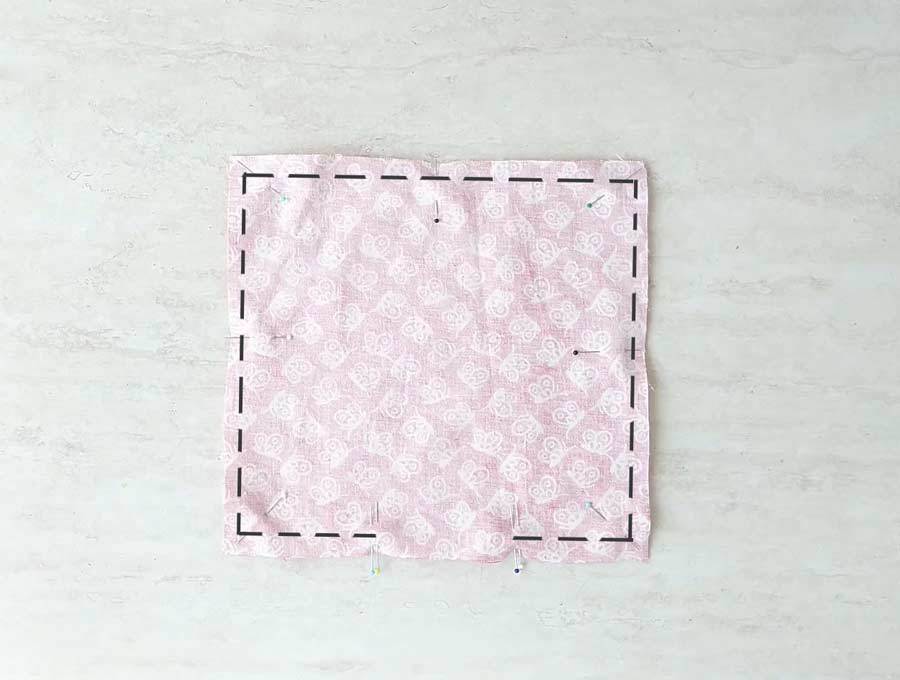 TIP: Use a walking foot instead of your universal foot for easy handling of these fabrics.

Trim the corners a bit so that they can lay flat after you turn the towel inside-out. 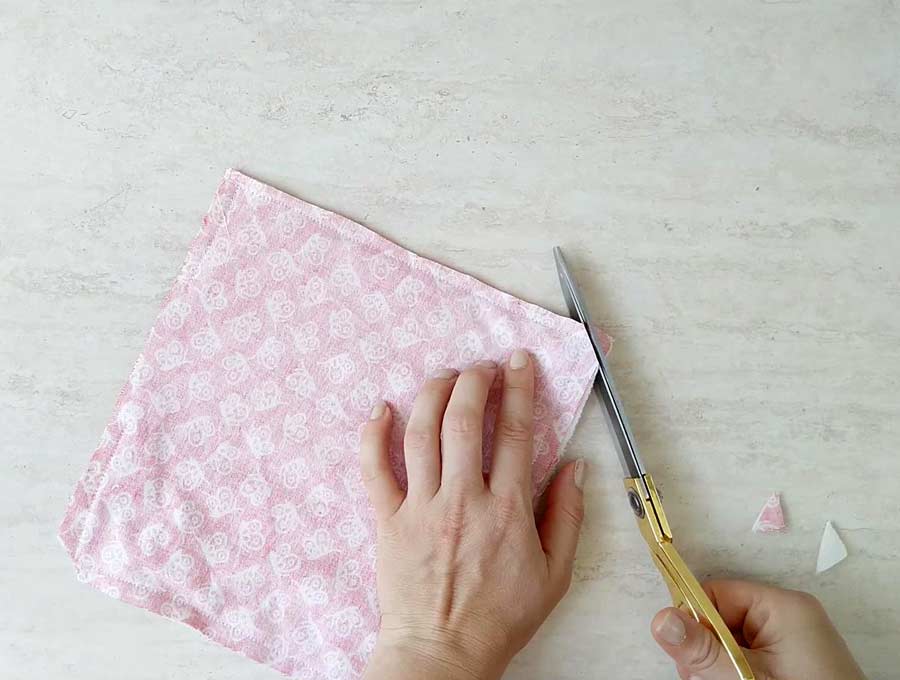 STEP 5: Turn the towel around

Turn the towel inside-out through the opening you left on one edge earlier. Fold in the edges of the opening and pin them in place.

Topstitch all around the kitchen towel using a 1/4″ seam allowances. Backstitch at the beginning and the end. This will also close the opening shut. 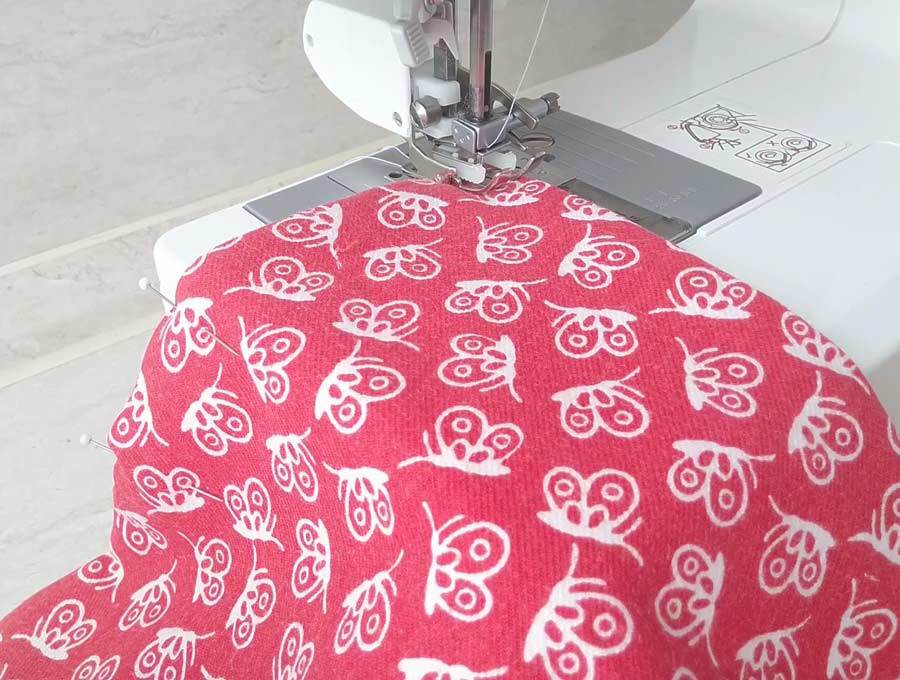 That’s it your reusable paper towel is ready! Now make 5 more for a full set! 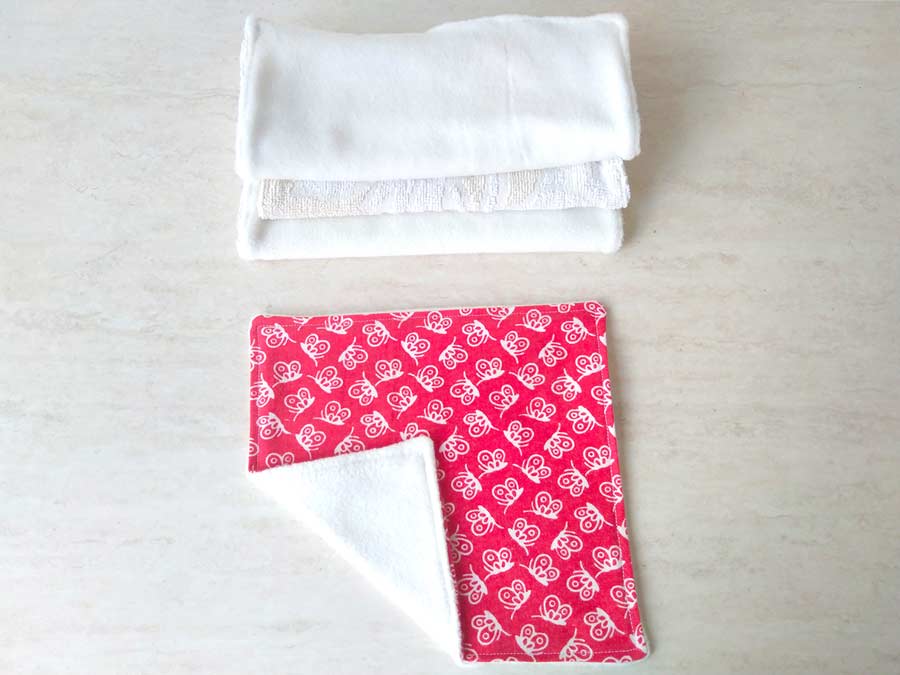 Unpaper towels, paperless towels, reusable cloth towels, kitchen cloth. These are all different names of the same useful, eco-friendly towels made from cloth that can be used for different purposes such as wash cloths, kitchen cloths, polishing or for mopping up spills.

Some people state that using reusable cloth towels instead of paper ones isn’t more eco-friendly at all. Their stance is that you end up using much more water electricity to wash them, which makes them less green than the paper alternative. I don’t share those thoughts, I think that’s not true.

I can use these towels for a few different things before I have to put them in the washing machine. I can also just quickly rinse and shake them off if needed before the washing. I always wash them with other stuff so I don’t turn the machine on just for a few pieces of cloth, which minimizes the water and electricity I spend on them.

On the other hand, paper towels are usually made from pure cellulose, and we all know where that comes from. From the poor trees that were cut down just for that purpose. The waste that is left behind after using this product isn’t all that small either, especially if you use up two or three rolls weekly. Finally, the factories that produce these towels aren’t exactly the best example of eco-friendly business, far from it.

To me, it’s pretty apparent which of the two options is the smarter choice and which one is just a method for large factories to make quick money without considering their environmental impact.

I’ve been using my unpaper towels for more than two years and they are still going strong. they are just as usable as they were in the beginning

I would suggest you to have at least two sets of 6 reusable towels so you can rotate them and you don’t have to run new loads of laundry all the time. If you have a large family or use a lot of towels,

Stitch two diagonal lines from corner to corner on your towels. Doing this will also give your towels a bit different appearance since it doubles as a decoration.

Did you enjoy reading this Unpaper towels DIY article? If you have some suggestions on how to make this tutorial better, please share your ideas with all of us in the comment section below. See you on some other fun sewing project! 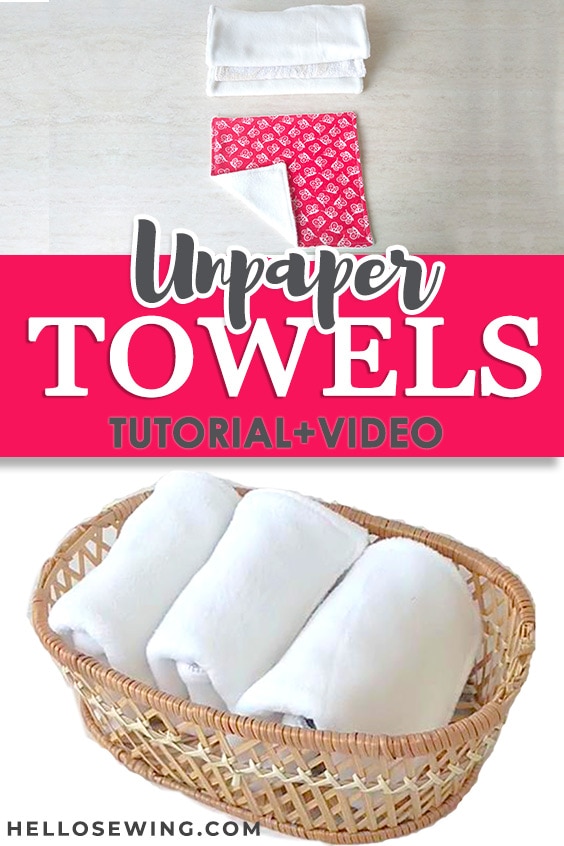 How to Make Mini Oven Mitts (with FREE pattern)

Reversible DIY Bath Mat out of (Old) Towels with a Twist

OMG! I love this! As for me I’m going to sew Aastra name initial, fairly large, like 4 or 5 inches in the middle. It will help with fabric sides staying together. Also personalize it as a gift. Maybe sew a loop on the outside of one corner to hang it up to air dry for more than one use. Flannel and quilters cotton the other side? What do you think?

That is a wonderful idea. Sewing the initial will definitely help the fabric stay together.
Sewing a loop is also a great idea, especially if you have where to hang them near the sink. If you are not sure how – check my tutorial for the DIY jar openers that I linked at the bottom of this article.
Flannel + cotton is also a good option for these!
I’m sure your friends and family will enjoy receiving these as gifts!

My best friend makes these. I need to ask her so send me some! I try not to use many paper towels but other members of the family love them!
http://www.chezmireillefashiontravelmom.com

What I have found when sewing two fabrics together, I need to make sure that the grain of the fabric is going the same way, otherwise, when washed, they tend to twist.
I love the idea of using old (not ragged) towels. Thanks for the great suggestion.

Thank you so much for the tip, Linda! I love giving old things new lease of life – it’s fun, it’s useful and it’s green!

Great Idea, you could also use old bath towels as they are cotton.

Great tip, Audrey! thanks for sharing